This Fourth Sunday of Lent is traditionally called Laetare Sunday, from the entrance antiphon of the Mass:

English:
“Rejoice, Jerusalem, and all who love her. Be joyful, all who were in mourning; exult and be satisfied at her consoling breast!“

The color for the Mass is the seasonal Lenten purple, the liturgical color of penitence and preparation, or for today the option of rose, the liturgical color of joy and rejoicing. On the one hand, it’s the joyful midpoint of our Lenten penitence, giving us a brief reminder of the Easter joy we’re preparing ourselves for. On the other hand, it’s also a reminder that even our penitence itself is essentially joyful, as offering our suffering and sacrifice unites us more closely with Christ and the mysterious joy of the paradox of the cross. 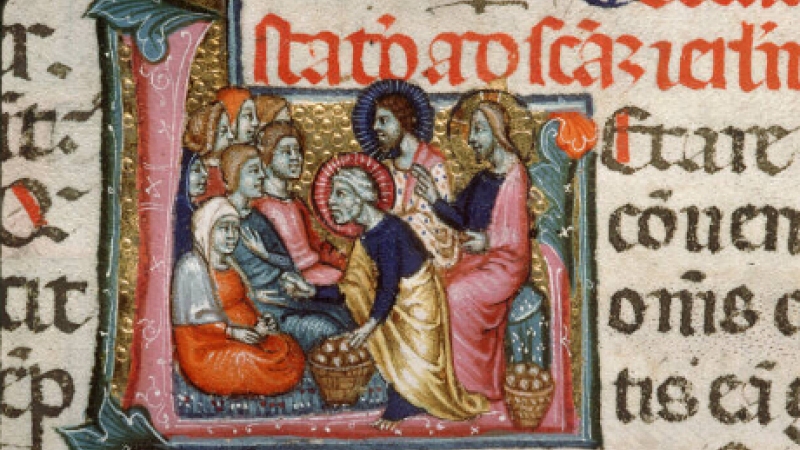 In our gospel reading last week, Jesus gave us our rude awakening. Our kind and gentle Jesus shouted us out of our spiritual sleep with the abrupt and sudden message, “If you do not repent, you will all perish!” Wake up! You don’t know that you have the next day or the next year to change your ways and take your eternal life seriously. You don’t know that you are going to heaven with your current spiritual condition. Repent, change your ways. Love God with all your soul and all your life, and bear the fruit of your faith, and do it urgently and always.

In this week’s gospel, we have the good news—the joyful news—that our God who urgently calls us to repentance, is eagerly waiting for us to return to Him, as a father who painfully misses his runaway child, that He might again embrace us in His love, restore us to our dignity, and share His overflowing joy with us.

The readings together share a common theme of renewal and “new creation.” In our first reading, actually right before our first reading, God instructs Joshua to circumcise Israel a second time. All those who had been circumcised when they had left Egypt had died for their unfaithfulness, and Moses had failed to circumcise the next generation. Circumcision is the sign of a man’s participation in the covenant. So Joshua did as God had commanded. And thus the first line of our first reading, “The LORD said to Joshua, ‘Today I have removed the reproach of Egypt from you.’” So immediately upon entering into the Promised Land, the Lord renews Israel in their identity and covenant as God’s people.

And then the Israelites celebrated the Passover for the first time with the fruits of the Promised Land. The Exodus began with the Passover, and now ends with the Passover, the sacrifice that is to be a perpetual reminder of the Lord liberating them from their slavery in Egypt. And now that their journey had come to an end, the miraculous food for the journey, the manna, which God had provided for them, has come to an end as well. The food they had never seen before its appearance at the beginning of the Exodus, they never saw again after the Exodus. But the Manna was one of the items God told them to put into the Ark of the Covenant (along with the tablets of the Law, and Aaron’s staff). And they believed the manna would someday return, with the Messiah, the new Moses, for the new Exodus, to the New Promised Land.

As great and momentous as their Exodus was, which freed them from slavery, brought them into the great covenant with God, revealed to them the truth of human nature and moral law, and instituted them as a nation, for all that, it was still only a promise of a greater Exodus yet to come. Moses did not circumcise the second generation, nor did Moses lead them across the threshold into the Promised Land. Joshua accomplished what Moses did not. The Hebrew for Joshua’s name is Yeshua, which is also the Hebrew for Jesus. Likewise, Jesus accomplished what Moses did not. Moses freed the Israelites (those who participated in the Passover and the circumcision) from the physical slavery of the Egyptians. Jesus frees all people (who participate in baptism and the Eucharist) from the spiritual slavery of sin. Moses gave the people the law of living by justice, written on stone. Jesus gave the people the love of living by mercy, written on the heart. Moses gave the daily miraculous bread from heaven that fed the body for the Exodus to the Promised Land of Canaan. Jesus gives the daily living miraculous bread from heaven that feeds the spirit for our new Exodus to the new Promised Land of Heaven.

In our second reading, Saint Paul teaches the Corinthians, “Whoever is in Christ is a new creation: the old things have passed away… And all this is from God, who has reconciled us to himself through Christ…” I have said before that God isn’t up in heaven with his angels keeping track of each of our mistakes and sins. He’s looking for us to become a certain sort of person—the sort of person who throws themselves upon the mercy of God with contrition, sorrow for their sins, and the hope that through God’s mercy, 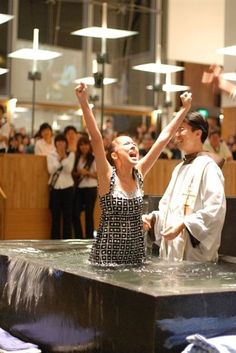 they will go and sin no more; to be able to amend their life and live virtuously and fruitfully. Each time we go to the Sacrament of Reconciliation, we re-enter into the mystery of our baptism, in which we are made anew from our old life. We become a new creation, not defined by our sin, but by God’s merciful love for us. And all this is possible through the life-giving sacrifice of Christ, who pours the grace of His Paschal Mystery into the world, and upon all who truly want to put their past behind them and step forward into their new life in Christ. Paul again pleads with us: “We implore you on behalf of Christ, be reconciled to God.”

The beautiful parable in our Gospel Reading has been given different names, each giving its own emphasis on how the parable might be interpreted. The most common title is “The Parable of the Prodigal Son.” The word prodigal means “spending one’s resources carelessly or indulgently.” And so this title emphasizes how the younger son “squandered his inheritance on a life of dissipation.” Another common name for this story is “The Parable of the Merciful Father,” or even the “Prodigal Father,” emphasizing the great indulgence of forgiveness expressed by the Father on the son’s return. Pope Benedict called this “The Parable of the Two Sons,” emphasizing the contrast between the contrition of the younger son and the hard-heartedness of the older son. The best name might be the “Parable of the Lost Son.” Jesus gives the parable in the context of Pharisees and Scribes offended that Jesus and his disciples are eating with sinners. Jesus responds with a number of short parables (which our reading skipped, between the introduction and the parable) such as the shepherd who left the ninety-nine sheep and found the one lost sheep, and the widow who had lost and then found her two coins. And then Jesus gives this parable, in which the father twice says that his son was lost, and is now found.

For today, we’re just going to focus on two things in this beautiful parable. First, the younger son had set off for distant lands. It sounds awesome in Greek, it’s the chora makra (which sounds like an alien race in Doctor Who) which means, “the great wide-open emptiness.” Now he’s suffering, because he wasted his money, and he’s starving, eating less than he’s feeding the pigs. He’s someplace where they herd pigs, so we know he’s not among the Israelites, because pigs are unclean. For Jesus’ audience hearing this parable, this would have connected with the theme of exile: Israel’s sinfulness caused them to leave the Promised Land and suffer disgrace and captivity out in the chora makra. We often think of sin in the sense that we broke a commandment or rule, and so we deserved to be punished. But here we have other images for sin: sin as exile, sin as suffering, sin as being unclean, sin as having lost our sense of worth or dignity. Surely we have felt these effects of sin.

And the second thing we’re going to look at is the encounter of the son returning to his father. When his father saw him from a distance, it implies his father had been in the habit of looking into the distance with the hope of his sons’ return. When the father saw that the son was coming home, the father ran out to meet him. The son didn’t even get the chance to finish his prepared speech! So what did the father do? First, it says the father was “filled with compassion.” The Greek word means, “He was moved in his guts, his bowels” (which is sometimes adapted to “heart”). It’s the same Greek word used when it says Jesus saw that the people “were like sheep without a shepherd, and his heart was moved with pity for them.” It’s that feeling deep within, of just wanting to embrace a loved one in their suffering, and pull them close and comfort them. It says the father, “embraced him and kissed him.” Literally in the Greek it says he “cast himself on the neck of his son”. If you’ve ever seen the videos of veterans returning home and surprising their loved ones (I love those videos!), what’s the response of that encounter? It’s this. A tight, full embrace of love of someone who was gone, maybe forever, and has returned. That’s the love of this father being shown.

Then the son tries to give his speech of his humble offer. But his father cuts him off, and tells his servants, ‘Quickly bring the finest robe and put it on him; put a ring on his finger and sandals on his feet.” What does that mean? It means that the son is not being welcomed back as a slave or servant, but being restored to his dignity as a son of the Father, as family. He receives the family cygnet ring, and will not go barefoot like a slave but with the dignity of having sandals for his feet. We can see how this father, in his prodigal (extravagant, bounteous) forgiveness of his son, undoes all our earlier images for the effects of sin. “Take the fattened calf and slaughter it. Then let us celebrate with a feast, because this son of mine was dead, and has come to life again; he was lost, and has been found.’”

All our lives, in every moment, God, our loving Father, is eagerly waiting, hoping, and watching for your return to Him. God wants to embrace you and welcome you to Himself, to bring you out of your suffering, to clean and wash you from your sins, and to restore and help you to see your own dignity as a son or daughter of the Most High God. This is the new creation, the restoration, made available to us by Jesus, by his life-giving, reconciling sacrifice, which we celebrate every Easter. It’s a miracle so wonderful, that we need 40 days of purification and preparation to enter into the celebration of so great a mystery. But first we need to wake up, and recognize our sin, and repent. Reconcile yourself with God. “Taste and See the Goodness of the Lord.”