This weekend, our readings remind us of our need to recognize and fear the grave danger of our sins, and our need to respond with hope and trust to God’s invitation to restoration and freedom through His mercy.

In our first reading, the Israelites are in Exile in Babylon. Because they had abandoned fidelity to God and the covenant they had made with Him, God allowed them to degenerate back into the conditions He first rescued them from: humiliation and slavery to another nation. Israel now recognized that their Exile was because of their sin. They recovered their cultural memory of God’s mercy toward them, and their identity as His covenant people. They repented of their corruption, and re-dedicated themselves to living by the covenant of God’s Law.

God tells them through Isaiah that the great Exodus from Egypt—His splitting of the Red Sea, His mighty rescue of them from Pharaoh and his army, the many miracles of their journey—to remember these no more, because compared to those great events at the beginning of Israel’s history, God is doing something now that will make those great events that seem like nothing! The royal procession that Israel will have as they are freed from Babylon and make their way back to the Promised Land will be magnificent! It won’t be forty years of wandering around the rough wilderness, suffering, complaining, and being disciplined into shape. God will prepare a straight, level highway across the desert, and flowing rivers through the wastelands, and they will return, from the greatest to the least—restored, rejoicing, and announcing God’s praises.

The Church, too, must do the same. We must remember (the Greek word, anamnesis— a “remembering” that makes the remembered event a present reality) what God has done for us, in making us His covenant people (collectively, in the paschal mystery, and personally, in our baptism). We must repent of our sins (individually, in the Sacrament of Reconciliation, and collectively, by praying for God’s mercy on the Church and on the world) that separate us from God and his Covenant blessings. We must remember our identity in Him, rededicate ourselves to living by God’s covenant, and prepare ourselves for the conditions of the New Exodus to the true Promised Land.

Before our second reading, in Saint Paul’s letter to the Philippians, he was warning the community against interlopers (“Judaizers”) who would try to convince them to comply with the Law, as a condition for being Christian. He tells them, echoing Christ, that the Flesh is of no avail. That in fact, if anyone had any right to boast of their merits according to the Flesh, it was Paul himself. And he then gives his impeccable credentials, even to a fault (as his zeal had made him a persecutor of Christ). Our reading begins with Paul telling them that he considers everything that the Flesh and this world has to offer to be worthless rubbish (actually, in the Greek, it’s a word for excrement), particularly in comparison to the value and hope in the faith of Christ. He says, “not having any righteousness of my own based on the law, but that which comes through faith in Christ, the righteousness from God…” It can sound like Paul is saying that just having faith confers God’s righteousness on us, and that’s partly true. But the early Christian use of the concept of “faith” doesn’t separate professing one’s faith from living out one’s faith. The Letter of James teaches us that a faith that is not accompanied by the fruit of a holy life is dead and cannot save. Paul says that he is “depending on faith to know Him and the power of His resurrection and the sharing of His sufferings by being conformed to His death…” We can’t be Christians in name only, or on Sunday mornings only, but we must be faithfully obedient to Christ in every way we live.

Saint Paul does not presume that he has attained his salvation, but rather, he says, “It is not that I have already taken hold of it, or have already attained perfect maturity, but I continue my pursuit in hope that I may possess it…” And then in an interesting connection to our first reading, Paul at the end says, “forgetting what lies behind but straining forward to what lies ahead, I continue my pursuit toward the goal, the prize of God’s upward calling, in Christ Jesus.” Like Israel freed from slavery in our first reading, Paul puts behind him the sins and errors of his past, straining forward to the rich life of grace in front of him, the wondrous, amazing things God has planned, by the grace made available by repentance and God’s perfect mercy, through Jesus.

And in our gospel reading, we have one of Christian Tradition’s favorite stories of God’s mercy. Jesus is sitting in the Temple area, teaching, and people have gathered to listen to him. And from across the square comes this crowd of scribes and Pharisees, pushing this disheveled woman in front of Jesus. They tell him, “Teacher, this woman was caught in the very act of committing adultery. Now in the law, Moses commanded us to stone such women. So what do you say?”

It says, “They said this to test him, so that they could have some charge to bring against him.” So what was the test? Well, we know from the Old Testament that in the Mosaic Law (the Law of Moses), the penalty for adultery is death by stoning (not just of the woman, but of the man, too… an interesting absence in the Pharisee’s presentation; it takes two to tango). And we know from the gospels that the Jews were forbidden by Roman Law from putting a person to death (which is why they couldn’t stone Jesus for blasphemy, they had to take him to the Roman prefect Pontius Pilate and have Jesus crucified for treason). And of course, Jesus was well-loved for his mercy and ministry to the downtrodden, outcast, and sinners. So the Pharisees’ trap was clever: If, on the one hand, Jesus says that the woman should be let go, then they denounce him for conflicting with the Law of Moses, and therefore clearly not the Messiah. If, on the other hand,  Jesus says that the woman should be stoned, then they denounce him to the Romans for inciting illegal execution, as well as denouncing him to the people as a hypocrite who doesn’t really support the mercy he spouts in his teachings. They win either way.

How does Jesus respond? “Jesus bent down and began to write on the ground with his finger.” Then he straightened up and said to them, “Let the one among you who is without sin be the first to throw a stone at her.” Again he bent down and wrote on the ground. And in response, they went away one by one, beginning with the elders.” So what just happened? And why oh why, was the only thing we ever know that Jesus himself wrote by his own hand, written in the dirt, and no one even wrote it down!? I mean, he wrote on the ground twice, and in the midst of this public confrontation, so it certainly seems important! 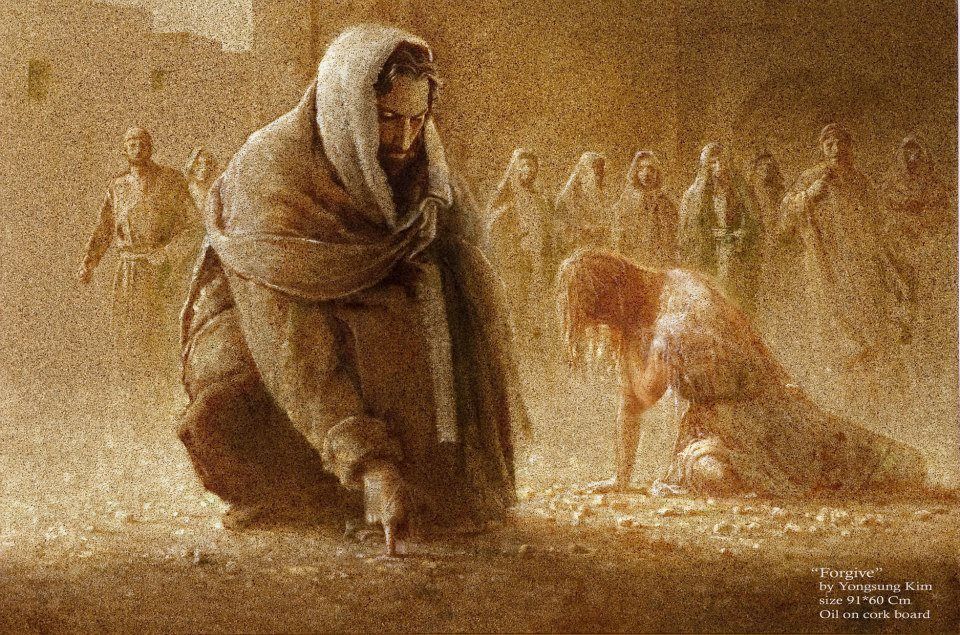 So what did he write? There are of course a lot of theories. Some say he wrote out the sins of the accusers. Some say he was just doodling in the dirt to show his disinterest in their accusations. We just don’t know. But being a fan of recognizing connections between the Old Testament and the New Testament, I think he wrote the names of the scribes and Pharisees, fulfilling an Old Testament image. Immediately before our gospel reading from the top of John Chapter 8, in John Chapter 7, it says, “Jesus exclaimed, “Let anyone who thirsts come to me and drink. Whoever believes in me, as scripture says: ‘Rivers of living water will flow from within him.’ He said this in reference to the Spirit...” And our Old Testament reference that ties these together is from the prophet Jeremiah, who says, (Jer 17:13) “Those who turn away from thee shall be written in the earth, for they have forsaken the LORD, the fountain of living water.” The Spirit is the outpouring of God’s life, and God’s mercy. And the Pharisees have clearly forsaken showing mercy to this woman, instead, fixating on their desire to discredit Jesus.

And then the divine brilliance of Jesus’ response: “Let the one among you who is without sin be the first to throw a stone at her.” The Pharisees thought they had trapped Jesus into one or the other of their two lose-lose options. “Yes, or No, and you lose both ways.” But with Jesus’ response, he reverses the trap back on them, forcing them to have to choose between their two lose-lose options!  Either they stone the woman, breaking Roman Law, or they don’t, breaking Mosaic Law, and admitting that they were sinners, not the righteous Pharisees they claimed to be. The elder ones figured it out first, and you can imagine them shaking their heads in frustration, as the younger ones puzzle what just happened. And they all went away, until it was just Jesus and the woman. Jesus of course, the only one there who met the criteria of being without sin.

So sometimes people ask, well, the woman did commit adultery—isn’t Jesus bending the law too far in just letting her off the hook? And that’s the cherry on top of Jesus’ brilliant reversal. In the Mosaic Law (Dt 17:6), it says, “Only on the testimony of two or three witnesses shall a person be put to death; no one shall be put to death on the testimony of only one witness.” Jesus asks the woman, “Woman, where are they? Has no one condemned you? She replied, No one, sir.” Jesus fulfills the law by letting her go, since now there are not enough witnesses left to condemn her. How amazing is that!?

But he doesn’t just send her away completely vindicated. She knows she truly sinned, and she knows that he knows she truly sinned. So she’s still fearful, not sure she’s really escaped the punishment of her sin. You can imagine her anxiety level through the roof. And so Jesus responds to her, “Neither do I condemn you. Go, [and] sin no more.” And that’s when she finally breathes the huge sigh of relief.

Notice Jesus does NOT say, “What you did was ok, your sin really isn’t a big deal.” Our sin is absolutely a big deal. The precepts of the divinely revealed Law still demand the same consequences. Adultery, fornication, theft, idolatry, the occult, all the sins that in the Law carry the sentence of death, they still do, as it did for this woman, as it does for us. But Jesus fulfills the Law.

Jesus Himself paid the death penalty for her sin, and for our sins. That is why we meditate on the crucifix—to behold with awe and gratitude Jesus’ sacrifice of divine love for us that redeems our lives—and more than that, gives us participation in the grace of divine love itself. And that is why it is Jesus who pardons us when we acknowledge our sins to Him in His Sacrament of Reconciliation. He earned the power and the authority. And at his Resurrection, He gave that authority to the Apostles and their successors, the bishops and priests of His Church. And so, my brothers and sisters, let us eagerly strain forward toward God’s mercy, confessing our sins and receiving his forgiveness, grace, and freedom—and then let us go, and sin no more.