Our newly acquired retired permanent deacon (he retired and moved to the area, and helps out generously!) Deacon Jim had approached me a few weeks ago, and asked if he could preach on the 3rd Sunday of Lent, because he had a homily on the Woman at the Well he wanted to give. I was all to happy to give him the opportunity. He doesn’t preach much anymore, and the people of the parish should hear more from him, and are probably happy to hear less from me once in a while! So this is my homily from the last time these readings came up in the lectionary cycle. God bless, and may it be fruitful!

John Smith was the first non-Catholic to move into a very Catholic neighborhood.  On the Fridays of Lent, John was outside grilling a big juicy steak, while all of his neighbors were eating fish for supper. The men of the neighborhood decided that he was tempting them with his steak each Friday of Lent, and they couldn’t take it anymore, and so they decided to convert John, which they successfully did. As he was baptizing John, the priest said: “You were born a heathen, you were raised a heathen, but now you are a Catholic.” The next year’s Lenten season came around, and on the first Friday of Lent, when the neighborhood was sitting down to their tuna fish dinner, came the wafting smell of steak cooking on a grill. The neighborhood men decided to meet over in John’s yard to see if he had forgotten it was the first Friday of Lent. They arrived just in time to see John standing over his grill with a small pitcher of water, saying, “You were born a cow, you were raised a cow, but now you are a fish.”

The gospel reading for this Sunday is thick and savory, like the smell of a good steak on a grill. There are many layers in this exchange between Jesus and the Samaritan woman at the well. As usual, as much as I try to lay out before you the rich feast available in the divine word, much of it has to be left out, because there’s just so much that God has prepared for us.

If you’re a first century Jew encountering this gospel story, you’re going to be struck by some things that we in our modern day aren’t attuned to. For example, the well. In Jewish scripture, when a man is waiting at a well and a woman approaches, there is going to be a nuptial aspect to the event. Many figures in Jewish history—Isaac, Jacob, Moses, all had this theme of the man meeting a woman at a well. But in this case, it’s no ordinary man and no ordinary woman, and so no ordinary nuptial theme.

Second, we have to understand who the Samaritans were. When the Assyrians dispersed the ten northern tribes, they settled the land themselves, and there was a lot of intermarriage between the Israelite Samaritans and the pagan Assyrians. So Samaria became the image of this half-breed, half-Jewish abomination. Their pagan religions eventually gave way to the worship of God, but with their own scriptures, their own priesthood, and their own place of worship (in Gerezim, not in Jerusalem). They worshiped God, but on their own terms, not on God’s terms. So there was this rejection of Samaritans, and when Jesus, a Jew, asks this Samaritan woman for a drink from the well, she’s shocked.

Third, we have to understand the term, “living water.” The common meaning of “living water” was moving water, like a stream or a spring, water that seemed to have a life of its own, in contrast to the stagnant water of  a pond, or even a well. Jesus offers the woman “living water.” Not just natural water for natural life, but eternal life. She doesn’t quite get it—she wants it so she doesn’t have to come to the well to draw more water. But she asks, so Jesus has the opportunity take her to the next level.

All of a sudden, Jesus moves the topic away from the well, and onto her and her sin. He knows her heart. And she totally changes the subject. We have a hard time grasping what a scandal it would have been for her to be five-time divorced and living presently with a man she’s not married to. She would have been a pariah, shunned. Some have suggested that’s why she’s drawing water at the well alone at noon, and not with the other women.

In the midst of this discussion, she brings up the Messiah. And he identifies himself. “Jesus said to her, ‘I am he, the one speaking with you.’” In the Hebrew, it says, “He who is speaking to you, I AM,” explicitly using the divine name.

Just then the disciples return, and are surprised. Why would the disciples be startled that Jesus is talking to this woman? He talks to women all the time. But Jesus is talking to a woman alone by a well. As we said, that (in the minds of the first century Jews) had nuptial connotations. They get it. It looks like he’s courting a future spouse. Why is he doing that? We’ll come back to that.

The whole thing about food, and sowing and reaping might sound like a tangent, but it’s not. Jesus ties it all together himself, saying, “I tell you, look up and see the fields ripe for the harvest. The reaper is already receiving payment and gathering crops for eternal life, so that the sower and reaper can rejoice together.” It’s a Eucharistic image! He’s referring to the Samaritans. The Jews saw half-Jewish unwashed mongrels, but Jesus sees a field of souls ripe and ready for the harvest, like wheat. The seeds were planted by Moses, Isaac, Jacob, and are now ready to be gathered by the apostles.

So what’s it all about? The image of Jesus as not just the Messiah, the Savior, but Jesus as the Divine Bridegroom who has come in person to wed humanity through the new covenant in his blood. So the woman at the well (for all her sin, yet her thirst for forgiveness, and faith in Christ) is a bride, and Jesus the bridegroom. The Samaritan woman is an image of the Church. She’s both Israelite and pagan, Jews and Gentiles, waiting for a savior to come and save them from their sin, from their adultery and idolatry. Jesus the Bridegroom meets this woman, at a well, offering her living water. Another meaning of “living water” was the ritual cleansing water of the bridal bath. She would wash in “living water,” like a baptism. So when Jesus promises this living water, he is proposing to His Bride, symbolized by the Samaritan woman, washed clean of her sin, without spot or blemish. 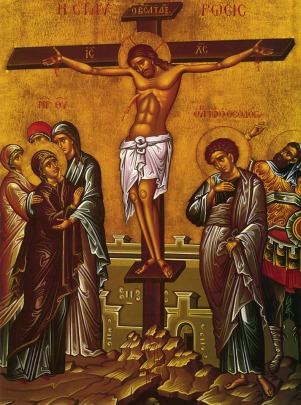 So what does that mean for us? When Jesus is pierced on the cross, it’s the living water and blood of the covenant, the life of His Bride, the Church, that flow from his side (which just might be related to Adam having his bride taken from his side; and may also be related to the psalm of life-giving water flowing from the right side of the temple, from the sanctuary…). And when do we individually receive the living waters that wash us clean from our sins? In our baptism. When you get baptized, all the sin and the effects of sin are washed away at that moment of baptism. This reading is preparing catechumens to receive the living water at the celebration of their baptism (and the other sacraments of initiation) at the Easter Vigil.

CCC 1617 beautifully ties this together: baptism, Eucharist, and matrimony: “The entire Christian life bears the mark of the spousal love of Christ and the Church. Already, Baptism, the entry into the People of God, is a nuptial mystery; it is so to speak the nuptial bath which precedes the wedding feast, the Eucharist. Christian marriage in its turn becomes an efficacious sign, the sacrament of the covenant of Christ and the Church. Since it signifies and communicates grace, marriage between baptized persons is a true sacrament of the New Covenant.”

Our catechumens are entering into this mystery. At the Easter Vigil, they are going to receive the baptism, the anointing, to enter into the Eucharistic wedding feast as new members of the bride (and of the body of Christ, for in marriage, the two become one).

If you take our first reading and the Psalm, about God providing life-giving water in the desert, and not hardening our heart, and combine it with the Gospel of the woman at the well, it’s about repentance. We want to be like the Samaritan woman, who doesn’t harden her heart. God has the power to make the living water spring from the Rock to wash you of your sin. That’s what he did Good Friday. The Rock is Jesus, the life-giving water springing from the Rock is the covenant, the water and blood that flowed from his side. Now the living water flows to us in baptism, washing us, to be members of His bride, the Church.