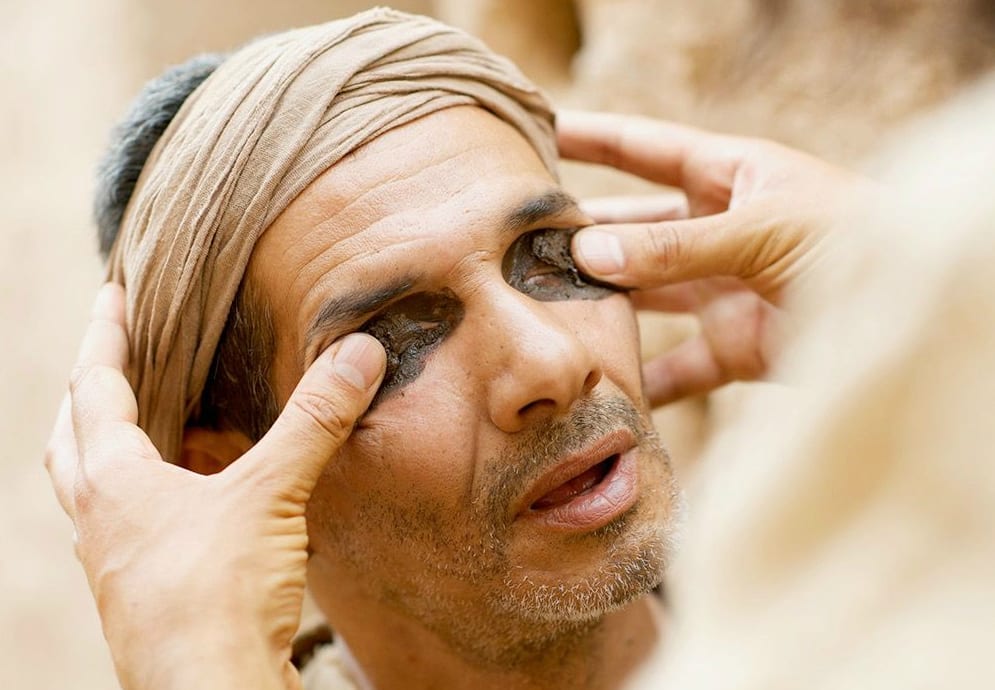 The Fourth Sunday of Lent (Year A) Laetare Sunday

Continuing the pattern of having long gospel readings for Lent, we have a long gospel reading today. I know there’s an option for a shorter reading. But I prefer the longer option. It’s more important for you to hear the word of God, rather than just my commentary about it. It’s the Word himself, Jesus, who is the way, the truth, the life. I just try to help us to match it up with our own lives and experience. With such an extended reading, we’ll just take a look at the general themes that we’re being given by the church, in this choice of readings for the 4th Sunday of Lent.

This is the fourth Sunday of Lent, so it is Laetare Sunday! “Laetare” is the Latin for “Rejoice!” from the first word of the Entrance Antiphon in Latin…

English: Rejoice, Jerusalem, and all who love her. Be joyful, all who were in mourning; exult and be satisfied at her consoling breast.

Why are we called to rejoice? Because the season of Lent points us to the celebration of the Lord’s redemptive passion and glorious resurrection! And today, we’re half way there! Also, it is to remind us that even in Lenten sacrifices of prayer, fasting, and almsgiving—and even in the suffering from our current “quarantine” situation—we are called to “give thanks to God in every circumstance” (1 Thess 5:18), and that it is right to lift up our hearts to the Lord, to give him thanks and praise, always and everywhere.

The first theme we’ll look at together is the opening question of our gospel reading. Jesus and his disciples saw a blind man, and they asked Jesus, “who sinned, this man or his parents, that he was born blind?” Jesus answered, “Neither he nor his parents sinned; it is so that the works of God might be made visible through him.” This is important and comes back later in the reading, because the pharisees say the same thing: he was blind because he was born in sin. The faithful are always faced with an apparent paradox: if God is all loving, and all powerful, why is there evil and suffering? The Church in her wisdom, has something of an answer to this question. God doesn’t will evil and suffering. And he most often doesn’t overpower the laws of nature with a supernatural act that removes evil and healing. But because, in his perfection, he knows that particular evil and suffering will happen, his plan accommodates the evil and suffering, if they are responded to in a holy, faithful way, to lead to greater holiness and faith (conversely, if someone reacts with weak faith, he may reject the opportunity to grow, and reject faith; so perhaps this is an example of Jesus words, “For to him who has will more be given, and he will have abundance; but from him who has not, even what he has will be taken away“). God knows that suffering can be good, in that it often has the effect of stripping away our distractions, and focusing us on what is truly important, what truly matters and endures. So this man in the gospel isn’t blind because it’s punishment for sins. He’s blind because that’s what happened naturally, but God is going to use it for an increase of holiness and faith.

The second theme follows right after that: the contrast between light and dark. This is a contrast that appears all over the gospel of John, right from the first words: “Through him was life, and this life was the light of the human race; the light shines in the darkness, and the darkness has not overcome it” (Jn 1:4-5). Jesus says in our gospel reading, “We have to do the works of the one who sent me while it is day. Night is coming when no one can work. While I am in the world, I am the light of the world.” This ties into our second reading from St. Paul: “You were once darkness, but now you are light in the Lord. Live as children of light… Take no part in the fruitless works of darkness,” and then Paul quotes what is probably a hymn at the time, based on Isaiah, “Awake, O sleeper, and arise from the dead, and Christ will give you light.” As we talked about a few weeks ago, after Jesus identifies himself as the Light of the World, he will also tells his followers that we are the light of the world, and we are to let his light shine out through us, for others to see him, that they might give glory to God and be healed and saved by him.

The third theme is the healing miracle itself. This is a strange thing Jesus does to heal this man. He doesn’t just say, “be healed.” Jesus “spat on the ground and made clay with the saliva, and smeared the clay on his eyes, and said to him, ‘Go wash in the Pool of Siloam’… So, he went and washed, and came back able to see.” There was a tradition in Israel (especially in the Essene community, which seemed to have had a strong influence on John the Baptist and Jesus) that in the Creation in the Old Testament book of Genesis, when God formed Adam from the dust, God used his own spit (in some mysterious way), to make the clay from which he formed Adam. And that’s key, because that’s what Jesus is doing: he’s repeating the act of creation, creating anew this blind man’s eyes, anointing and healing his vision. So we have Jesus being clearly presented as performing a divine action. And it hearkens to Jesus’ mission: to recreate, to restore the world, to make all things new in Himself. Jesus told the man then to wash in the “Pool of Siloam,” which was fed from the Gihon River, which was named after one of the four rivers in the garden of Eden.

And throughout the gospel reading, we have this progression of faith from the man born blind. First he calls Jesus a man, then he calls Jesus a prophet. In his exchange with the Pharisees, he defends Jesus as a man sent from God. Then in his exchange at the end, he says to Jesus, “Lord, I believe,” and worships him. Of course, worship belongs to the Lord God alone.

And finally, the fourth theme I want to bring out, the exchange at the end of the reading between Jesus and the pharisees. Jesus declares, “‘I came into this world… so that those who do not see might see, and those who do see might become blind.’ Some of the Pharisees who were with him heard this and said to him, ‘Surely we are not also blind, are we?’ Jesus said to them, ‘If you were blind, you would have no sin; but now you are saying, ‘We see,’ so your sin remains.’”

And that ties to our first reading, about the anointing of David by Samuel. Samuel had anointed Saul as king, and that had gone badly. So Samuel had it in his mind what the new king should be like. But he was looking with the eyes of fallen humanity, not with the eyes of God. It took God to reveal to Samuel, David as the true king, the one who would be a shepherd after his own heart. And of course, our Psalm was that beautiful and beloved Psalm 23, written by David, the shepherd boy who became the shepherd king: “The LORD is my shepherd; I shall not want. beside restful waters he leads me; he refreshes my soul…”

So why these readings for the 4th Sunday of Lent? I mean, they’re great, but why now, in Lent? Because they are chosen to encourage the catechumens of the Church who are preparing for baptism, preparing to be made new, to be re-created by Christ. In the Ancient Church baptism was sometimes called the sacrament of illumination, of receiving the Light of Christ (symbolized by receiving their baptismal candle), and illuminating our lives to be his light in the world, and to see the world by his light, having our vision healed by grace. Like the blind man said, and quoted in the hymn, Amazing Grace, “I once was blind, but now I see.”

According to commentary from Dr. John Bergsma, there is a particular appropriateness, then, of having Psalm 23 in our readings today. In the catechesis of the Church Fathers, Psalm 23 was one of the favorite texts for sacramental instruction, taken as a typology of the sacraments:

(1) “Beside restful waters he leads me, he refreshes my soul” — these are the waters of Baptism, that give us rest from our sins, and “refresh” (better: “restore”) our souls by infusing us with divine life.

(2) “You spread a table before me in the sight of my foes”—this is the altar, the banquet of the Eucharist, which gives us courage and strength in the midst of the persecutions we experience in this life at the hands of our foes—Satan, his demons, and our persecutors.

(3) “You anoint my head with oil”—this is the oil of Confirmation, that strengthens us to give witness (in Greek, “mártyras”, the root of our word, “martyr,” one who witnesses with the full measure of life and death) despite the opposition we encounter from others.

(4) “My cup overflows”—this is the Eucharistic cup, which always overflows with the Holy Spirit, giving us new life.

Lastly, I want to revisit the theme I’ve been trying to get across this whole time we’ve been suffering through the temporary closing of the churches. That with fallen, human eyes focused on the world, we might take pleasure in the lifting of the obligation for Mass, as a relief and a welcome break. But for those with eyes (and heart) healed by grace, we can see this truly as a time to grow in longing for God, longing for the sacraments of the church. Perhaps this is the healing and renewal of love for the sacraments that the church needs right now, that God is providing by bringing good out of suffering. I posted online a quote from the catechism that during the season of Lent, the church unites herself to the mystery of Jesus in the desert, in the arid wilderness, hungry, thirsty, and longing for comfort, as he is prepared during this time to be strengthened, to be focused on his mission, to reaffirm his reliance on God alone. And so we can ask Jesus to unite ourselves to him, and to the man born blind, that we might see by the light of faith; we can ask Jesus that when our exile, our period in the wilderness, is over, that our purification will be profound and enduring, that ever after, we would take no part in the fruitless works of darkness, but to live as children of light in the Lord.