The Jewish feast of Pentecost was called Shebuoth, or The Feast of Weeks. It was a harvest festival, for which the people of Israel would pilgrimage to Jerusalem to offer the best, the first fruits, of the harvest to God in thanksgiving. It was called Shebuoth, the Feast of Weeks, because it was the day that crowned seven weeks of seven days after the Passover. So the evening of the forty-ninth day began the feast of the fiftieth day, Shebuoth. The Greek word for fifty is Pentecost.

In the Jewish liturgical celebration of Shebuoth, one of the readings would be from Exodus, Chapter 19, which tells of Israel through Moses receiving the Stone Tablets of the Law from God at Mount Sinai, which was wreathed with smoke; and it says, the Lord descended upon it with fire. If one were to study the book of the Exodus, one might also notice that this receiving of God’s Law at Sinai happened fifty days after the Israelites departed from Egypt at the Passover. So this Jewish Feast of Weeks, of Shebuoth, Pentecost, was also a celebration of Israel having received the divine law from God.

That sets the stage for our readings today. The disciples—not just the twelve, but a hundred twenty, including the Blessed Mother—were gathered in prayer, as the Lord had told them at the Ascension to do. Meanwhile, outside, people from all over the world—some Jewish, others, gentile converts, others, pagan worshipers of Israel’s God—were all gathered to celebrate the feast of Pentecost. It was a very lively moment. And into that moment, in the presence of the disciples, our first reading tells us, there was a rushing wind. In Hebrew, the word “ruah” means wind or breath or spirit. It’s the word used at Creation when it says the Spirit (ruah) of God hovered over the waters, and the ruah that God breathed into Adam. So the ruah, the wind, the divine breath, rushed through the room, and tongues of fire rested above each of the disciples.

According to Jewish Tradition, it took 10 people to establish a synagogue, a local church. They have already replaced Judas with Matthias, so the Eleven are back to Twelve Apostles, and enough other disciples to establish a synagogue under each one. At Sinai, the Lord descended with fire upon the twelve tribes of Israel. Here at Pentecost, the Lord descends with fire upon the Twelve Apostles, and their “tribes,” their churches, of the New (worldwide) Israel. James (the Less, the Son of Alphaeus, “James, the Brother of the Lord”) will stay and lead the Jerusalem church. Peter will go to Antioch and then to Rome. Andrew will go to Greece. Thomas will go to India. John will be exiled to Patmos, and so on. Yet they are all united by the Holy Spirit as the one, holy, catholic, and apostolic Church. “Catholic” comes from kata-holos, “according to the whole.” The Church taught (and was) everywhere the same truth, and the whole truth.

As God made the covenant at Sinai establishing Israel as the People of God, and gave them the Law of the Covenant on the stone tablets, here at Pentecost, in Jerusalem, the city of God’s presence with his people, the Holy Spirit in a similar way establishes the new covenant with the New Israel with his own divine ruah, and fire, and, as the prophets had said, he establishes the new law not carved into stone, but written into the flesh of their hearts.

And we have another connection to the Old Testament: the Tower of Babel. In Genesis, in the generations shortly after the Flood, 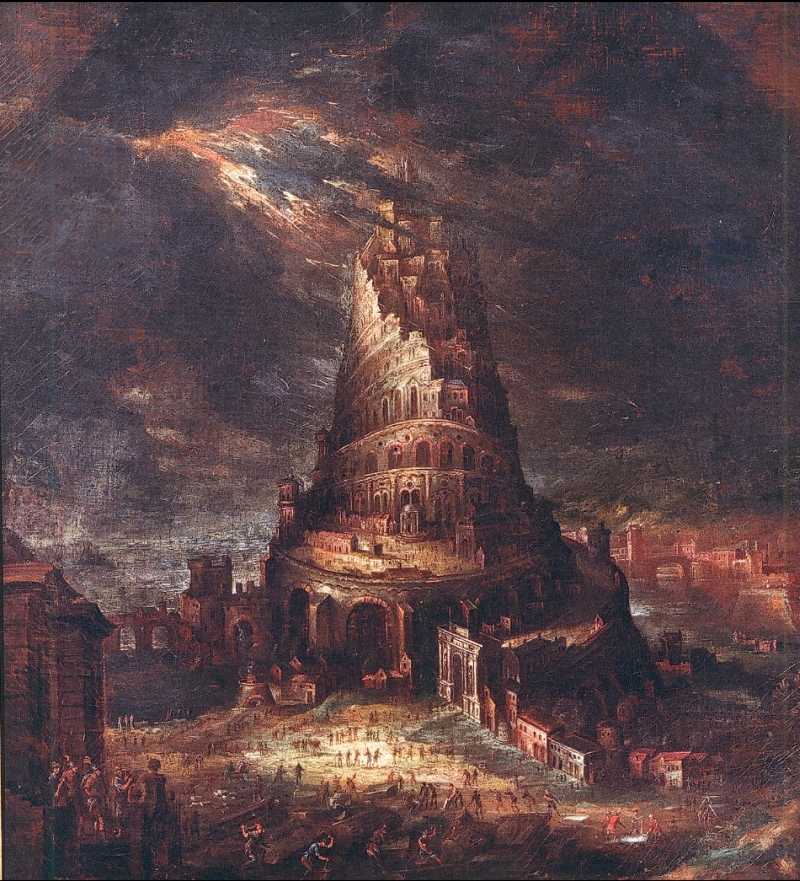 humanity, still speaking a single language, decides (as fallen humanity often tries to do in different ways in different ages) to build a giant tower—a siege tower—to take heaven by force. God observes what they’re doing, and divides and confuses their language, reflecting the division and confusion in their hearts and their relationships to Him and to one another. Thus confused and confounded, they each wander off to different parts of the world. But “Babel” is the root for our term “babbling,” that is, making unintelligible sounds.  The city that opposes God is also the city of unintelligibility. Opposition to God leads to moral and intellectual confusion, the loss of truth and goodness. And we see this today among those who oppose God’s truth and his Church.

So in Pentecost, and we have the reversal of the confusion of Babel. People of all different languages come together and understand the disciples, who are full of the Holy Spirit, the Spirit of unity and truth. We might notice the progression of responses among the crowd—first they are confused, because they understand the apostles, then they were astounded, then amazed. As we open ourselves to God working within us, first it is confusing, then as we begin to understand, we are astounded and amazed, at how he works in our life and our situations.

So that’s the event of Pentecost, but what’s the importance of Pentecost? It means that everything Jesus accomplished in his mission into the world—his life, his healing, his self-giving love, his word, his wisdom and light, his forgiveness of sins, his sacraments of grace, his life-giving body and blood, his death to separation from God and resurrection to eternal life, his ascension and holy communion with the life and power of the Holy Trinity—all that is given to us. The divine power that said “Let there be light, and bang, there was light”—that power is given to us by Pentecost. The Holy Spirit is the power of the sacraments, the fire of God’s love that changes the nature of material things into signs of sublime spiritual realities that communicate himself to us. The Holy Spirit is the lifeblood and soul that binds the Church into the mystical body of Christ, and we as members of the Body, sharing in its glory, and in its sufferings, but suffering with faith, hope, and love. The Holy Spirit is the presence of God within us, prompting us to accomplish his will for us, and through us to the world. Pentecost is the big bang of the new creation. It is the pouring out of the Holy Spirit to renew the face of the earth. For those who have eyes to see and ears to hear, this changes everything. It is the power of God in us. The holy communion of Emmanuel—God for us, God among us, God within us. And it is the mission to bring others into this holy communion of God’s love and truth. Pentecost is still a harvest festival!

How do we respond? By putting sin behind us, by living by the inspired teaching of the Church, and not the errors and sins of the world. That’s the first and most basic response: Go and sin no more. But more than that, we respond by frequent and devout prayer, by weekly or even daily (worthy) participation in the holy liturgies and sacraments of the Church. We read and study and contemplate the Divine Word of the bible, filling our hearts and minds and uniting ourselves with his Word. We ask for the intercession of the saints in glory, especially our Blessed Mother, whose last words in Scripture are, “Do whatever he tells you.” The Blessed Mother was overshadowed by the Holy Spirit, conceiving the Divine Word in her womb, and her response was that she went with haste to minister to the needs of Elizabeth, and sharing her joy. The Church receives the Holy Spirit, and our response must likewise be that we go with haste to minister to the needs of the world, sharing our joy.

Pentecost is our invitation to continue in ourselves the life and ministry of Jesus Christ our Lord. By the Holy Spirit of his love, he gives us the power to deny ourselves, pick up our cross, and follow him, through death to everlasting life in His glory.