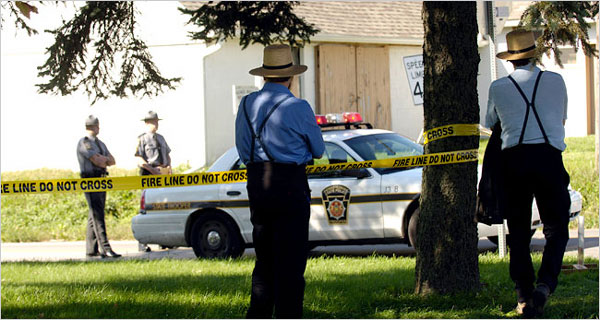 I recently read the book, Amish Grace, the response of the Amish Community in Lancaster County to the 2006 school shooting in the West Nickel Mines Amish school. As soon as the event became known, in which several of the children of the community were shot by a mentally ill gunman who was not Amish, who then killed himself, the community went to the family of the gunman and offered support and forgiveness for the shame and difficulty they must feel, and for losing their husband, and father, and main source of family income.

The Amish struggled with living out that forgiveness perfectly in their feelings, but their will, their chosen response, was to offer forgiveness, and did so automatically, as part of their cultural identity. They were amazed, they said, that we were amazed, at their immediate response to show forgiveness. To them, that was what it meant to be  Christian. Many who lost children, or whose children were permanently scarred or disabled from the event, continue to will forgiveness against their occasional feelings of anger, but they also have the support of their families and community in their struggles. There continues to be a healthy, joy-filled, and love-filled relationship between the Amish community and the family of the gunman.

Many critics in the media (because that’s what they do) said that forgiveness came easier because the gunman was killed, and they didn’t have to deal with his fate. But in other crimes against the Amish community, they took great pains to go to court to plead for mercy for the perpetrators, especially when the death penalty was a consideration.

Forgiveness does not mean that the wrong-doer escapes any and all consequences for their actions; that itself would be injustice, and would not help to reform the wrong-doer. But it does mean that those who have been wounded refuse to nurture their anger and right to vengeance, in favor of seeking the reform of the wrong-doer, and a restoration, or even increase, of peace in the community.

We could learn something from the Amish in their response to wrong-doing, even egregious wrong-doing like a school shooting. We can offer forgiveness to Nikolas Cruze. We can seek his healing and salvation. We can choose not to nurture and expand our emotional response of wrath and vengeance, but ask God to heal our unforgiveness, and heal Cruze of the mental illness and wounds of his childhood that brought him to this situation. Yes, he chose to do this act, and he is accountable to the just and fair consequences of the act. But it is not just and fair to bring down on him our anger for being part of a larger rash of school shootings, and the failure of our society to serve and protect our children, and our mentally ill among us. (There is also the question about whether true justice, which includes mercy, ought to rightfully include killing the guilty, but that’s a separate discussion.) This forgiveness is not to suppress and sublimate our negative feelings, but to let them die of starvation, to let go of them, and turn our hearts back to the response we have chosen, instead of the feelings. I disagree with the Amish on many issues, but I think they have a lot to teach us about grace and forgiveness.

This is my last post and comment on the guns and school shooting topic. I don’t have the solution, except for the long-term solution of righting the host of deprivations and depravities which our society has tolerated and even celebrated. The ultimate solution is the conversion of hearts and minds to love and truth. But that will not stop those whose hearts and minds are deformed. And that—the concrete, short-term, urgent (before our next school shooting attempt) aspect of the solution—is where I bow out of the conversation. My expertise is neither guns nor law. My expertise is forgiveness, and the call to holiness, to divine truth and love, and that’s the long hard, narrow, uphill way, to ultimately solving this (and everything else). But to come up with the urgently needed solution that will protect our kids from the *next* shooter? I humbly defer to those with more wisdom in this matter. God bless you and protect you, and your families.