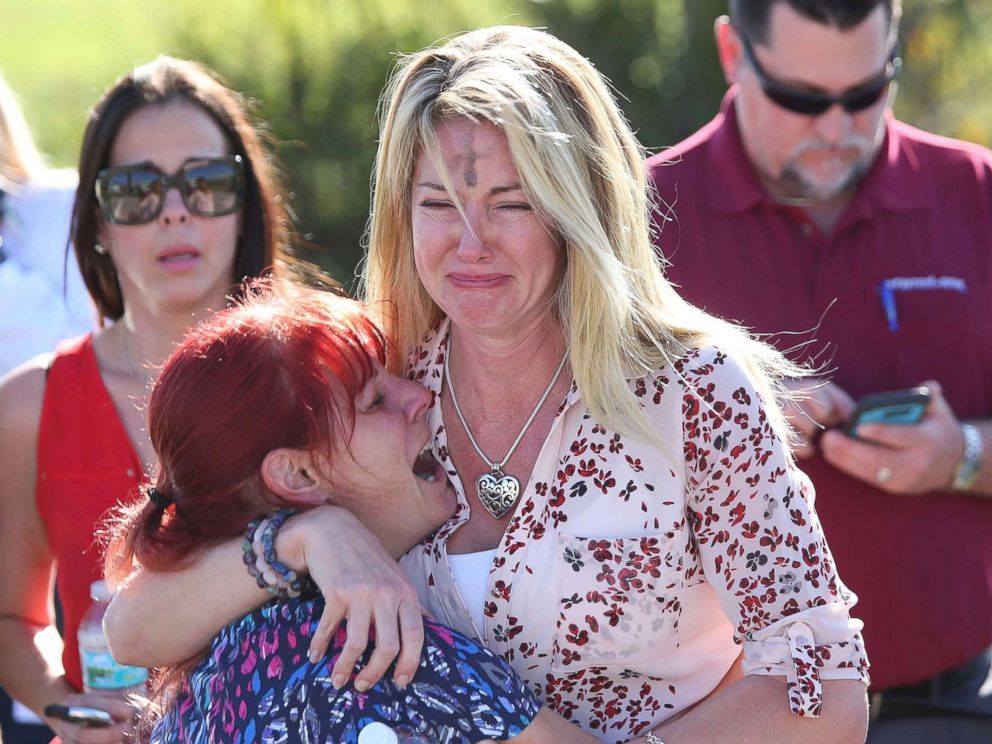 I’m writing this (ok, starting this) on February 15, the day after Ash Wednesday, as marked by the poignant picture of this woman, waiting in the parents’ and students’ area outside Marjory Stoneman Douglas High School in Parkland, Florida, still with her ashen cross emblazoned on her forehead. Social Media is, not unexpectedly, aflame with frustration over expressions of “thoughts and prayers for the victims” while, cynically and probably not incorrectly, another mass shooting fails to inspire any legislative response. This post isn’t about what political or legislative response we should hope for. It’s about the thoughts and prayers. And why people are frustrated with the expression.

We believe in the God who is Love, the God of Compassion, and of infinite Might and Power. But also a God who did not prevent His Son from being executed for political and religious motives, by those who should have rushed to worship Him rather than kill Him. He loved His Son perfectly, divinely, and with all the fullness of his own infinite nature. Sure, His Son was going to be resurrected after three days. But God isn’t three days ahead, He’s fully present to the reality of the present moment. And we cannot fathom or understand His experience at the agony and suffering and death of His Son incarnate.

We humans, whose love is hampered by our sinfulness and limitedness, still love others, most especially our children, with incredibly profound depths of love, self-sacrificing love. Which tells you something about God’s love, the perfect source of our imperfect love. As members of the Body of Christ, we share one another’s grief and pain, their joy and hope. When one member suffers, the other members of the Body share in that suffering. Even beyond the Body of Christ, our shared human identity connects us together in a natural bond. Our imagination tries to simulate what it must feel like to experience what they are experiencing. It allows us to empathize. And we can imagine what it might be like for those people whose children were killed or injured yesterday in Florida. Those who have children can empathize better than those who do not. Those who have lost children can perhaps empathize even better, but not perfectly.

Most of us “ordinary people,” meaning those without any significant and immediate capacity to directly respond to the events and people personally affected by this tragedy, we have this sense of sorrow for them, our empathy for them, our compassion for (suffering+with) them, and seemingly nothing productive to do with it. So we post on social media, “Our thoughts and prayers are with the victims of this tragedy.” And it is right and good to do so. We do believe in the power of prayer, and of the unity of all of us as beloved creatures (or Sons and Daughters) of the Most High God, made in His image (of Love) and likeness (of Holiness).

Fr. Mike Schmitz over at Ascension Press has an awesome video on the Power of Prayer and why we are called to pray, even though God’s already going to do what is best. We are called by our faith (and nature) to participate in the will of God the Father, and thus learn better the heart of the Father, and conform our hearts to His. God is with the brokenhearted, with the suffering and those who mourn, and so in prayer, we are, too. Our thoughts and prayers are with the victims. Jesus did not come to end suffering, but to be with us through every suffering of ours, to let us know we are never abandoned or alone, especially when we most feel like we are. To post to social media our identifying with the pain and suffering of the victims is (at least remotely) to have the chance that we are among the many who are surrounding them as a cloud of support and encouragement in their dealing with their suffering. For the most of us, the “ordinary people” without any significant and immediate capacity to directly respond to the events and people personally affected by this tragedy, that is noble and compassionate.

Prayer is a gesture of solidarity by those who can do little more than such a gesture. It’s an expression of mercy. But mercy is more than compassion. It’s also a desire to end the suffering of the other, if that is within the person’s power. Ah, there’s the rub. “Thoughts and prayers” are good and holy, if that’s all the person can offer to the victim of a man-made tragedy, like a school shooting. But they are perhaps not quite so good and holy if they are an empty offering by those in a position to address the situation, both for the victim of this tragedy, and to prevent future similar tragedies with future victims. Political and social leaders of faith are certainly entitled to extend gestures of thoughts and prayers. But they are not entitled to hide behind that gesture when they do have the power, and therefore the duty, to do more. 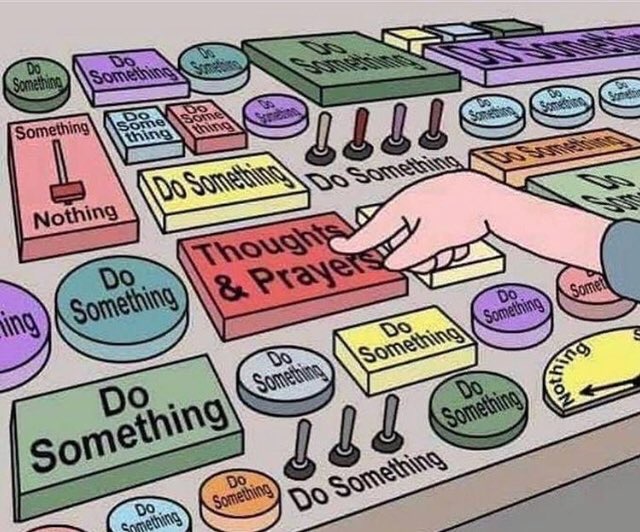 “Thoughts and prayers” have been offered to the victims of tragedies for many, many years. And again, rightly so. But as it became clear that these were code words by politicians for “but although we’re responsible for fixing this problem, we’re going to use these words to avoid fixing this problem,” then the phrase “thoughts and prayers” took on a very negative connotation. As cynicism, distrust, and frustration with politicians has grown, and especially as the political divide in our culture has widened, “thoughts and prayers” has come to embody the willful ineffectiveness of government to pass legislation our country needs (besides immigration reform, healthcare reform….). Of course, rushing to pass policy riding on the wave of national outrage is not likely to be the right path, either, even though it satisfies the sentiment that at least something was done, even if it was the wrong thing.

Thoughts and prayers are not a substitute for doing one’s duty in pursuing the right and true solution to the gun-violence problem we have, particularly as it manifests in school shootings. Yes, politicians of faith should offer their thoughts and prayers, but the point is that (if they mean it, and want to avoid an accusation of religious hypocrisy) they cannot stop there. Again, this post isn’t about what politicians should do. It’s about why politicians offering their “thoughts and prayers” elicits such bitter response.

However, for you and me, we offer our thoughts and prayers. We’re not politicians, we’re not local Floridians. Sure, we might send a card or online message. But while we send our thoughts and prayers to the victims of yesterday’s school shooting, and the victims of all the past mass shootings, it would perhaps be more noble to actually offer prayers rather than just a vague promise to do so.

“May God heal the broken-hearted and comfort the sorrowing as we once again face as a nation another act of senseless violence and horrifying evil.” – Archbishop Thomas Wenski of Miami

Eternal rest grant unto them, O Lord. And let the perpetual light shine upon them.

And perhaps it would be more noble to actually think of what we might do. Certainly many parents hugged their children tighter last night. Hopefully they also told them to play with the lonely kid at school, and to be kind to the classmate that everyone picks on. Hopefully teachers and classmates and even other parents know what kids are having difficulties at home, and venture to offer support and love, and reminding them of their dignity and gifts. And hopefully school staff are also vigilant of students displaying signs of emotional and psychological illness, signs of destructive, violent, and angry impulses, and aggressively seeking for them the help and attention that they need. Perhaps they can be rescued in all the ways in which past shooters have been failed in getting them the care and concern that their dignity deserved, before the unthinkable happened.

Perhaps also this will be the catalyst to begin concrete initiatives to do what can be done, not just to get the mentally ill the help they need, but to prevent them from having the opportunity to repeat what happened yesterday in Florida. What can we do before the next potential school shooting? We don’t need more children victims, or mourning and grieving parents. My thoughts and prayers are with them. May the Lord Jesus, who wept at the death of his friend Lazarus, and the Mother of Jesus, who stood at the foot of the cross of her son, bring consolation to the parents, families, and friends of those who died, and ease the suffering as they prepare to lay their children to rest. May God guide us in truth, wisdom, and grace to prevent future tragedies like this one.