Our Gospel reading we just heard is a parable in three images, tied together with the theme of “Lost and Found.”

The first image is the shepherd who leaves his flock of 99 sheep in the wilderness to go after one stray sheep. Jesus tells his listeners, “What man among you having a hundred sheep and losing one of them would not leave the ninety-nine in the desert and go after the lost one until he finds it?” And the answer is, no one would do that! The parables of Jesus share two universal features: the twist, and the upshot. Almost all his parables have a twist, or maybe even more than one, where he says something striking to catch people’s attention, and gets them to listen and remember his parable. Then he ends with the upshot, in Hebrew, the nimshal, which is the teaching-point of the parable. There’s the twist: no shepherd would leave 99 sheep vulnerable in the wilderness to find one single sheep. So, Jesus grabs their attention with something unexpected. Then he continues, “And when he does find it, he sets it on his shoulders with great joy and, upon his arrival home, he calls together his friends and neighbors and says to them, ‘Rejoice with me because I have found my lost sheep.’” Ok, a second twist. Sheep and cows get lost all the time. Fences break, animals wander, it happens. And when they’re found, the farmer doesn’t call all his farmer friends and have a party. Then finally, Jesus finishes this first image: “I tell you, in just the same way, there will be more joy in heaven over one sinner who repents than over ninety-nine righteous people who have no need of repentance.” There’s the nimshal, the upshot, the teaching point. Jesus reveals that he is using this image to teach us that heaven rejoices over the lost being found, more than over the righteous who were never lost.

Of course, it’s obvious Jesus isn’t talking about sheep. Remember the beginning of the reading, the occasion for Jesus to give this parable. “Tax collectors and sinners were all drawing near to listen to Jesus, but the Pharisees and scribes began to complain, saying, ‘This man welcomes sinners and eats with them.’ So to them he addressed this parable.” These sinners gathered around Jesus are people breaking the law of Moses in a public and grave way. Prostitutes and harlots openly broke the sixth commandment against adultery and fornication. Tax collectors openly broke the seventh commandment about stealing, getting rich on collecting more than what the Romans taxed. That’s the situation Jesus is in. The Pharisees are scandalized. This might be like a bishop being criticized for having dinner with a “Catholic” politician whose political actions consistently violate Catholic teaching, causing scandal to the upright and holy people of the Church.

One of the things I love about this is how Jesus gets in a dig at the Pharisees. They are of course sinners, too, because we’re all sinners. But they see themselves as righteous, having no need of forgiveness. But Jesus ends the parable saying, “there will be more joy in heaven over one sinner who repents than over ninety-nine righteous people who have no need of repentance.” Why? Because the Pharisees are too self-righteous to recognize their sinfulness. The self-righteous don’t cause any joy in heaven, because their pride will keep them from heaven. So Jesus is also chastising them to recognize that they also need repentance.

And it’s a beautiful image Jesus gives us, of the joy the truly Good Shepherd has at finding his lost lamb, setting it on his shoulders with great joy, and carrying it home. And I love the quote I saw online that said… 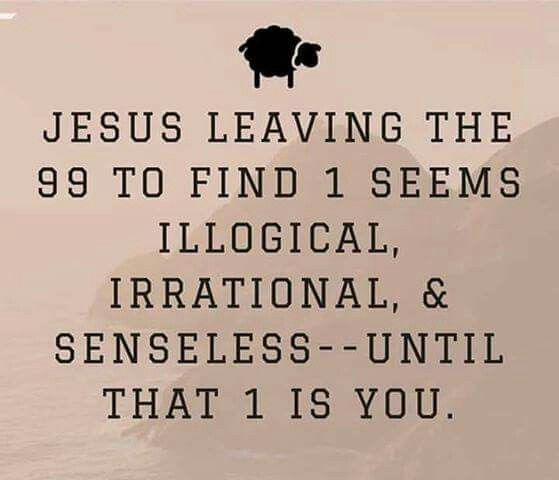 The second image Jesus gives is similar. This coin was about the worth of a day’s wages. So not a winning lottery ticket, but not something you’d want to lose, either. It might have been one of the ten coins that made up the nuptial headdress, like a wedding ring. Houses were not well lit, so it would be difficult to find. And when she finds it, she’s filled with joy—this coin that has much more sentimental value than its cash value. And Jesus ends this image like he did the first. The lost coin is like the lost sinner who is now found, worth more to God than most people would reasonably value. And there will be rejoicing among the angels of God over one sinner who repents. Again, Jesus is also making an invitation to the Pharisees, not just the other people. God wills that all people would seek His mercy and be saved.

And finally, after the parable of the Lost Sheep and the Lost Coin, we have the Lost Son, which we often call the Prodigal Son. Jesus packs a lot into this story, and we’re not going to unpack it, because the Gospel reading was so long. We’re just going to touch on one thing: the older brother. The older brother can symbolize a lot of things. In our specific gospel reading, he represents the Pharisees. He was resentful of the younger brother, who foolishly and sinfully chose to get himself lost. So when the older brother finds out the younger brother has decided to return, and that The Father has forgiven and restored him with joy and mercy, the older brother has a choice. He can hold on to his resentment, or he can share in the joy and mercy of the Father.

The Father came outside to find the older brother, too, so that he would not be lost. But the hard-hearted resentment of the older brother is a warning from Jesus. If we take the attitude of the older brother (or the Pharisees) that those who got themselves lost deserve to stay lost, then we risk turning ourselves away from the joyful heavenly banquet feast over the lost one who was found.

1 thought on “Homily: Lost and Found”