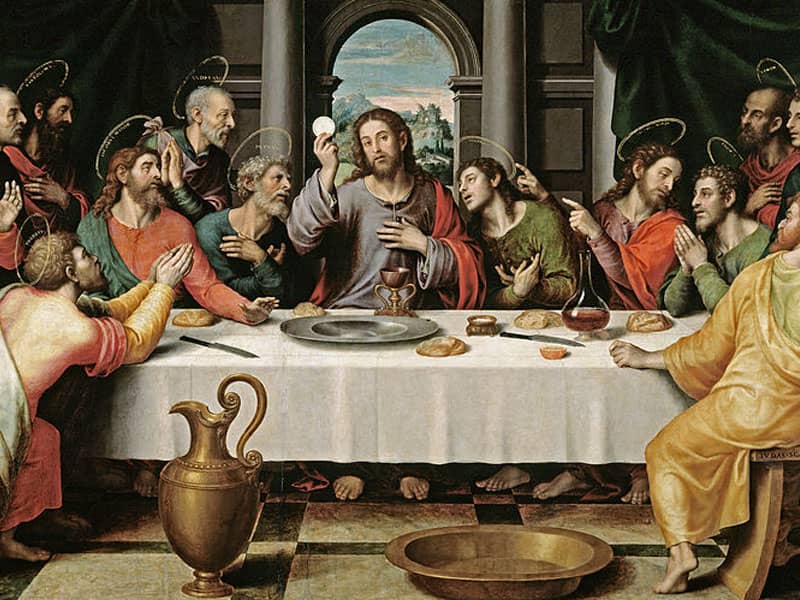 The Easter Season ends with four great feast days in a row: The Ascension, Pentecost, then a week later, Holy Trinity Sunday, and a week after that, today’s feast day, The Solemnity of the Most Holy Body and Blood of Christ, more commonly known as the Feast of Corpus Christi (Latin for “Body of Christ”).

You would think then that our Gospel reading would be about Jesus at the Last Supper instituting the Eucharist, but you’d be wrong. As we just heard, our gospel reading is about Jesus miraculously feeding the crowd of 5000. I want to highlight just three important points from this reading.

First, the words used to describe what Jesus does. It says, “Then taking the five loaves and the two fish, and looking up to heaven, he said the blessing over them, broke them, and gave them to the disciples to set before the crowd.” Taken, blessed, broken, given. That is an important sequence, and we hear it over and over. We’re going to hear it again when St. Paul recalls the Last Supper in the second reading, and we’re going to hear it again after that, when we recall the Last Supper in the Eucharistic Prayer.

The second thing I want to point out in the Gospel is an unusual reference to Moses. In Exodus, Moses is serving as Judge of Israel, settling all their disputes all day long. His Father-in-law comes along, and says, there’s a better way to do this. Find some holy, trustworthy men, and set them as commanders of thousands, of hundreds, of fifties, and of tens. By the 1st Century, the idea of twelve judges organizing the people of Israel into multiple groups (the one that gets highlighted is groups of fifty) becomes an image associated with the organizational structure of the Exodus. So when Jesus does something similar, taking twelve men and appointing them to organize the people into groups of fifty, he’s revealing his identity as the new Moses. The twelve Apostles are like the new twelve judges, and the people are like a new Israel, because this is the new Exodus. You might recall that prophecy by Jesus to the Twelve: that they would sit on twelve thrones judging the tribes of Israel.

And the third highlight from the Gospel is their location. They’re in the desert wilderness, which of course has lots of spiritual significance. In the Old Testament, it’s the location of the Exodus, and the miraculous bread of the manna, the bread from heaven, the food for the journey. In the New Testament, it’s the location of Jesus’ three temptations from the devil, where Jesus was fasting and hungry, and the devil tempted him to use his power to miraculously provide himself bread. Here in our reading today, Jesus uses his power not for himself, but to provide superabundantly for the sake of his followers. So Jesus again is revealing his mission as the New Moses, who deputizes his appointed leaders to administer his authority over the New Israel, and provides a miraculous outpouring of the New Manna, bread from heaven in the wilderness, on the way to the New Promised Land.

While there is definitely an intentional scriptural connection between the miraculous multiplication of loaves, and the institution of the Eucharist at the Last Supper, we can see how the Church understood the distinction of these two miracles of bread. Yes, we should feed the poor, and not withhold our generosity in meeting their human needs. Jesus does (often miraculously) meet our needs, and we need to do likewise, and meet the needs of others. But Jesus didn’t institute the Last Supper in the presence of the multitudes, telling them that it was his body, and to do so in remembrance of him. He instituted the Eucharist among those who were in communion with him (Judas then carried out his betrayal, breaking communion, to his own downfall). St. Paul, at the beginning of the letter that is our first reading, reprimanded the Corinthian Christian community for tolerating or accepting someone living in an immoral relationship, and instructs them that “the one who did this deed should be expelled from your midst” –essentially excommunicating him (for the sake of his conversion and salvation, which continues to be the Church’s goal in any censure). The Catholic Church, which is unusual but far from alone in practicing “closed communion,” often endures criticism for withholding the Eucharist from those who are not living in full communion with the Church. This practice is clearly rooted in Sacred Scripture and Tradition, and so cannot validly be put aside.

In our first reading, we have the three lone verses of a figure that looms large in the history of Jewish conscience, and especially of Christian conscience, the priest-king Melchizedek.

Abram (long before God changes his name to Abraham) had just defeated five Canaanite kings to rescue his nephew Lot, and he was returning home with his nephew and his spoils of war, when in the valley of kings, he meets Melchizedek. “Melchi” means “king” and “zedek” means righteous. He’s the righteous king… of Salem, a word that later evolved into the word “Shalom,” “peace.” (He is the righteous king of peace). The place where Melchizedek was king—Salem—later became known as Jerusalem.

In the first lines of Psalm 76, David sings, “In Judah God is known, his name is great in Israel. His abode has been established in Salem, his dwelling place in Zion.” Judah is the southern region (eventually the southern kingdom), whose capital is Jerusalem. Zion is the mountain Jerusalem is built on. Salem, Jerusalem, Zion, are all the same place.

And Melchizedek is a king, but he is also a priest. He offers a thanksgiving sacrifice of bread and wine, and pronounces a blessing on Abram: two distinctively priestly actions. Why does the Church have this reading for the feast of Corpus Christi?

In the three-year cycle of the Sunday readings, there is a different theme each year for this feast. In Cycle A the theme is the Eucharist as our food and drink; in Cycle B the emphasis is on the Eucharist as the sign of the covenant; and in Cycle C (this year) the theme focuses on the priesthood of Jesus.

The Letter to the Hebrews in the New Testament goes to great lengths to show that King David of Jerusalem, and his sons after him, also saw themselves as priest-kings, after the pattern of Psalm 110, our psalm for today (a coronation psalm, singing “you are a priest forever”). And Jesus, as the ultimate Son of David, not only inherited the kingship of his ancestor-father David, but also his priesthood. Jesus is the fulfillment of the figure Melchizedek, the righteous priest-king of Jerusalem, who offered the sacrifice of bread and wine, in thanksgiving (in Greek, eucharistía) to God for having delivered him from victory over his enemies.

And lastly our second reading. St. Paul emphasizes that although he wasn’t at the Last Supper, this is a firm part of Christian Tradition; Tradition, from the Latin meaning, “to hand on.” Paul says, “I received from the Lord what I also handed on to you.” And what does he hand on? “That the Lord Jesus, on the night he was handed over, took bread, and, blessed it, broke it and gave it to his disciples, saying, ‘This is my body that is for you. Do this in remembrance of me,’” and so on. That sequence of verbs should ring a bell. We heard it before, right?

I’ll just end with this. Paul continues after the end of our reading, saying, “Therefore whoever eats the bread or drinks the cup of the Lord unworthily will have to answer for the body and blood of the Lord. A person should examine himself, and so eat the bread and drink the cup. For anyone who eats and drinks without discerning the body, eats and drinks judgment on himself.”

According to the commentary on these verses in the New American Bible…Paul uses a series of wordplays in these verses; references to judgment (krima, krinō) discernment (diakrinō), and condemnation (katakrinō).

We are called, by our human nature, and our Christian vocation, to unite ourselves to God, in mind, heart, soul, and strength. If we participate in the sacrament of communion, but in reality having broken communion by mortal sin, we disrespect the truth; and we profane the gift of the Lord’s body and blood in the sacrament. We will invite not grace but judgment on ourselves. The prayers of the Mass forgive the non-deadly venial sins we commit. But if we are guilty of grave sins, mortal sins, then we must seek healing in the particular sacrament of Reconciliation, the power of the keys given to Peter to bind and loose sins, before we can worthily share in the sacrament of communion.

In the mystery of this sacrament, the body and blood of Christ, truly present in the thanksgiving sacrifice on the altar, we unite our whole human nature, body and spirit, with Christ,  worthily participating in the communion of the mystical body of Christ, that we might be nourished on the Way to the true Promised land, our heavenly and eternal home.