In the first half, Jesus is giving a warning to his disciples against the example of the scribes. The scribes were the theologians, the bible scholars, those who could read and write the sacred language of Hebrew. And in a religiously-dominated culture like first century Judah, the scholars were pretty popular and influential men. And they enjoyed (to a fault) the popularity and influence, the honor and respect, paid to their office in society. They took advantage of their esteem, wearing long lavish robes with long tassels, showing off that they made their wealth by their knowledge, not by manual labor.

They were the opposite of what Jesus was teaching disciples about authority and power. True exercise of influence flows from love and humility, it is focused on the good of others. The scribes were focused on the good of themselves. To augment their income, they would take commission from lengthy prayers, in a show of piety.

And with that, Mark transitions into the second half of our gospel reading. Jesus just pointed out to his disciples that the scribes “devour the houses of widows and, as a pretext recite lengthy prayers. They will receive a very severe condemnation.” Then he sat and watched as people entered the Temple and gave their offering. Jesus pointed out to his disciples that while the rich gave large amounts, out of their excess wealth, this poor widow gave the smallest amount, but it was great because it was the greater personal sacrifice, a greater act of faith that God would provide her with what she would need.

It’s become a popular progressive interpretation of this reading that Jesus isn’t praising the poor widow, but criticizing the Temple system under which she felt obligated to spend her last coins, leaving her destitute, to satisfy her commitment to God. And that’s a convenient interpretation, if that fits your agenda. But that interpretation only works if you ignore everything else Jesus said about money, detachment, sacrificial generosity, and trust in God for your daily bread.

Jesus didn’t condemn the Temple system, he condemned the abuses against the Temple system. He condemned appropriating the court of the Gentiles as a market place. He condemned scribes who were more interested in leeching off the respect of the people (including widows) than in serving the sacred Word they studied. He condemned Sadducees who manipulated the law to protect their wealth. He condemned Pharisees who cared more about ritual purity than being tender and merciful to the suffering and the outcast. The Temple was where the faithful came to give glory and thanks to God. It was the earthly image of the heavenly temple. It was the precursor of the New Temple which would be His body, and our bodies which are temples of the Holy Spirit, and his mystical body, the Church. And if people had a corrupted image of the Temple, they would corrupt all the images flowing from it.

And so that progressive interpretation of this gospel reading doesn’t work. What does work? The interpretation that has been applied to it throughout Sacred Tradition: Jesus is pointing out the sacrificial generosity and trust of the poor widow as their example, against the bad example of the scribes. Someone who makes $20,000 and gives 5% to the church is making a more generous sacrifice than someone who makes $40,000 and gives 5%,  even though it’s more, because the less you make, the higher percentage is eaten up by necessary expenses, just to get by. We have widows on social security putting in their 10 or $20 every week, and families with pretty well-paying jobs putting in the same 10 or $20.

Did the Temple need this widow’s pennies? No. The Temple was decorated with gold. It was the economic center of Jerusalem. The giving wasn’t about the receiver. The giving was about the giver. This is this widow’s last two coins. What did she choose to do with the last of her money? She chose to make an offering to God. As opposed to the outward show of piety of the scribes, the widow quietly, humbly, and with great faith, expressed in her actions that she indeed loves the Lord our God with all her heart, with all her soul, with all her mind, and with all her strength. Not because she gave generously, not because she was buying a favor from God, but because our outward action, her choice, was in harmony with (at peace with) her inner disposition of simple, perfect trust in the Lord.

Per Dr. John Bergsma: In many ways, this widow was willing to do what the rich young man (Oct. 14th, 28th Sun. in OT) was not: that is, to give up her worldly possessions to possess God.  This is the act of faith we, too, are being called to make.

Again, in an allegorical way… the poor widow is the simplicity of the Church: poor indeed, because she has cast away the spirit of pride and of the desires of worldly things; and a widow, because Jesus her husband has suffered death for her. She casts two mites into the treasury, because she brings the love of God and of her neighbor, or the gifts of faith and prayer; which are looked upon as mites in their own insignificance, but measured by the merit of a devout intention are superior to all the proud works of the Jews. The Jew sends of his abundance into the treasury, because he presumes on his own righteousness; but the Church sends her whole living into God’s treasury, because she understands that even her very living is not of her own desert, but of Divine grace.

To help us to see this, the Church chose our first reading to be a more ancient and almost parallel example: the Widow of Zarephath. There was a terrible drought. 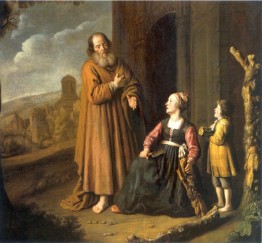 The prophet Elijah was on the run from the lukewarm king Ahab and his wicked queen Jezebel, and God directs Elijah to the pagan city of Zarephath. At the entrance of the city, he sees this widow. I always get a little kick out of this dialogue, because this widow and her son are down to nothing, one last little morsel before they die of starvation. And Elijah tells her, yeah, ok, but first make me a cake.

It is a test of her faith: Is she going to be afraid that God can’t provide, or will she trust that even if she gives her last meal to the prophet that God through his prophet will care for her family. The reason I picked that image for the header of this reflection is because it captures the same hesitation and soul-searching—am I sure  this what God’s calling me to do?—before making her generous, sacrificial choice.

Notice the first line of Elijah: “Bring me a little water to drink.” That might make you think of Jesus in the Gospel of John where he says to the Samaritan woman (another non-Israelite woman being invited to faith) to give me a drink. So you have this invitation to provide hospitality/kindness for this holy man of God. And in return, the woman receives a superabundant outpouring of nourishment (for the widow of Zarephath, an unemptying supply of food; for the Samaritan woman, the fountain of living water).

Then Elijah gives her a promise, from the God of Israel, that their jar of flour won’t go empty, nor the jug of oil run dry, until the day when the LORD sends rain upon the earth. And this woman does what Elijah says. And sure enough, the Lord’s promise through Elijah is fulfilled.

But what an incredible act of faith of this poor widow of Zarephath! And God rewarded her act of faith superabundantly, providing her with her daily bread miraculously from a jar and a jug that never went empty until the rains replenished the land, and the city could finally grow more crops. She and her son had almost nothing, and gave all they had at the service of their faith in God.

Remember this story of the widow of Zarephath. We’ll hear about her again the first Sunday in February, when we’re in next year’s Lectionary cycle, going through the Gospel of Luke. Just after Jesus reads the mission of the Messiah from the scroll of Isaiah, he says, “Amen, I say to you, no prophet is accepted in his own native place. Indeed, I tell you, there were many widows in Israel in the days of Elijah when the sky was closed for three and a half years and a severe famine spread over the entire land. It was to none of these that Elijah was sent, but only to a widow in Zarephath in the land of Sidon.” Jesus is proclaiming (and the people understand that he is proclaiming, when they drive him out of town) that the mission of the Messiah is not just to Israel, but to the foreign nations of the gentiles as well.

Per Dr. Brant Pitre: Also too, I might point out, on the spiritual level, what might bread and oil point to? Those are both sacramental images. We receive the sacrament of the Eucharist, which is made from flour that never runs out, which has been offered since the Last Supper and which will be offered until the end of time. What about the oil? Think about the sacred oils that are used in the rights of baptism, confirmation, holy orders, anointing of the sick. All of those oils flow from the offering of Jesus on Calvary and we’re never going to run out of them. So you see here a prophetic prefiguration of the unending abundance of the sacramental life of the church.

That’s also the widow in the Gospel reading: giving not out of their surplus at the end of the month, but giving up front and trusting God to make it work. Of course, you can’t trust God at the beginning of the month and then not follow his will with the remainder, or it might not work out. We don’t put the Lord God to the test. We’re called to trust God in our hearts. We give out of our need in generosity, trusting that God will provide for our needs. It isn’t a deal, where we put out up front and God had better pay out a good return so we can get things that aren’t part of his plan. That’s a good way to set up our faith in God to fail.

Also, last thing. This instruction to sacrificial giving in faith is not in conflict with holy stewardship. We are called to be good, prudent stewards of our resources. Everything belongs to God. Everything comes from Him, the best we can do is cooperate with what He gives us. God says to humbly and trustingly—prayerfully—give Him His part first. Then He will give you guidance, if you listen to Him, for what you need with the rest.

I’m not a financial advisor, I’m a spiritual advisor. If you’re in a situation that isn’t working out, go get a financial advisor. But be steadfast in spiritual giving being a non-negotiable. Not because we can buy our way into heaven. But quite the opposite: because we need to grow in our faith and trust and obedience (and gratitude) toward God and our dependence on Him, to get into heaven. Jesus speaks about our disposition toward money a great deal, because that certainly gets our attention. We will put our treasure where our heart is, and our heart will follow where we put our treasure. God desperately wants us with Him. If we put our treasure there, our hearts are sure to follow.