In the time since I began seminary, I’ve learned about many interesting and beautiful Catholic traditions that I didn’t know about: St. Joseph’s bread, holy relics, St. Blaise throat blessings, the Angelus, and related to today’s readings, the Jesse Tree.

The Jesse tree is an ancient Advent tradition that has its source in today’s first reading from Isaiah: “On that day, a shoot shall sprout from the stump of Jesse, and from his roots a bud shall blossom. The spirit of the LORD shall rest upon him.” As we read the Old Testament by the light of the New Testament, we know that Isaiah was writing about Jesus, even if Isaiah didn’t know it when he wrote it. Jesus is the one that Israel has been waiting for, the fulfillment of the long-awaited hope for the Messiah, the Son of David, to come and begin the new age of the Messiah, which Isaiah writes about so beautifully in his book.

King David had been given a promise by God that his throne, his royal descendants, would rule forever, not just over Israel, but over the kingdom of creation, a kingdom that would have no end, geographically or temporally. But so many of David’s descendants were corrupt, weak, and faithless, that their poor example and leadership led Israel into corruption, weakness, and faithlessness. And God allowed their sinful choices to lead to the suffering of the Babylonian Exile. After the exile, the Dynasty of King David’s family was no more. Obviously, that presented a problem for the ancient hope that one of the kings of David’s line would be the great king of Israel’s future glory, foretold by the prophesy. David’s line had been cut down. It was not like a mighty tree, but a dead stump. There were descendants of David, but they weren’t kings. And after the return from the Babylonian Exile, Israel’s kings weren’t from the line of David, son of Jesse.

Yet God is true to his promises. So, through Isaiah, he gives Israel this reassurance of their hope: “A shoot shall sprout from the stump of Jesse”. Sometimes it happens that when a tree is cut down, it doesn’t die. It begins to regrow, starting with a little shoot from the seemingly dead stump. A new hope for the mighty tree. In the Gospel of Luke, the genealogy starts with Jesus, and ends all the way back with Adam. 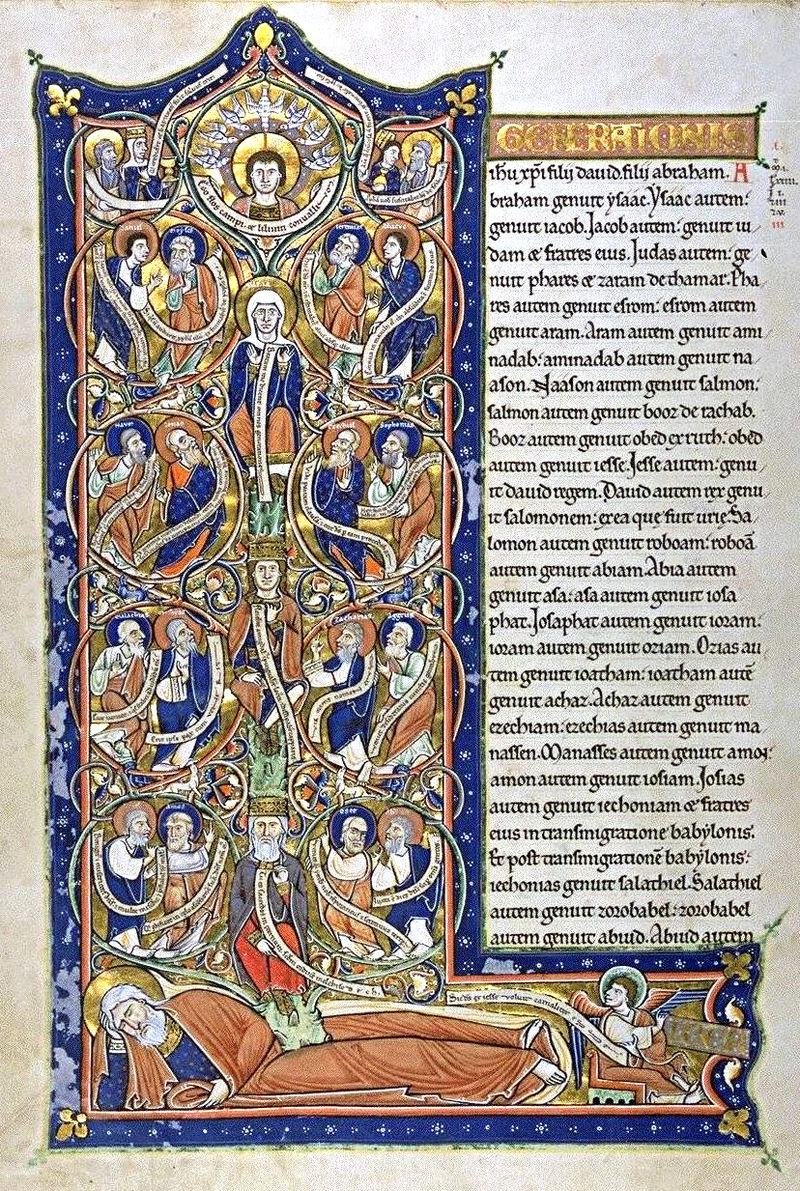 As a way to celebrate Jesus as the long-awaited Son of David, son of Jesse, the tradition of the Jesse Tree developed in Catholic art, especially in artistic biblical manuscripts and stained glass windows beginning in the 11th century. The “shoot” that will sprout is the Hebrew word netser, which also can be translated as rod or branch (or flower, as it was by St. Jerome in the Latin Vulgate bible of the Church). Ancient images of the Jesse tree show a branch growing upward from Jesse, often through David, then through Mary, and then flowering at the top as Jesus. And the space all around is filled with the historical figures or events that lead up to Jesus. 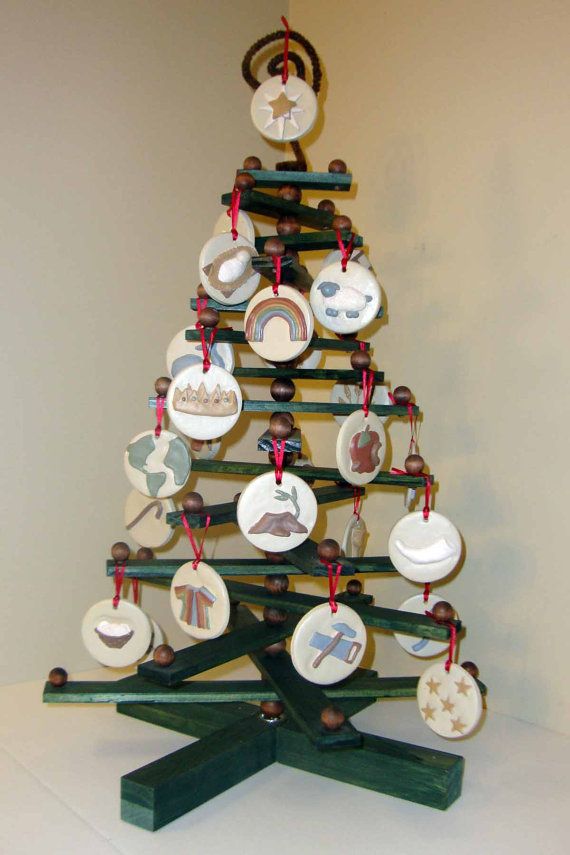 The Jesse Tree in modern times is a beautiful Advent tradition, especially for children. Each day, a symbol from Old Testament history is put on the tree, starting from the bottom, starting with images from Genesis, and a little reflection is shared about the image. Each day another symbol is added, with the reflection about its importance, all the way up to Christmas eve, and the fulfillment of the Old Testament with the arrival of Jesus, the Son of David, Christ the newborn King.

This would be a wonderful tradition for our parish families, who want to help their children grow in their spiritual awareness of the Old Testament leading up to Jesus, and their spiritual appreciation of Advent as more than shopping and decorating.

Isaiah describes the shoot of Jesse as filled with the Spirit of God. Then he gives us what we call the seven gifts of the Holy Spirit (wisdom, understanding, good counsel, fortitude, knowledge, piety, and fear of the Lord). “Not by appearance shall he judge, nor by hearsay shall he decide.” This connects to last week’s gospel about two people working, and one being taken and the other left. That is, that Jesus knows the secrets of the heart. Even those who appear to be good, or bad, or the same as others, outwardly, the divine Judge, Jesus, knows fully, and judges perfectly. Isaiah then goes on to describe the world of the Messiah, an image of peace throughout all creation, as a restoration of the Garden of Eden. And peace among humanity, as even the gentile nations will seek out the Messiah. “Justice shall flourish in his time, and fullness of peace forever.”

Our Gospel reading today reflects the progressive focus of the Advent Season: The first week our focus is on the Second Coming of Jesus, to remind us to prepare ourselves for Jesus coming in glory to judge the world. The second and third week our focus is on St. John the Baptist, to prepare us for the ministry of Jesus as he manifests his Messianic identity and mission to bring the fulfillment of God’s mercy to those who respond to the invitation to faith. And then the fourth week of Advent our focus is on the unfolding of the events immediately leading up to the birth of Christ. So our Advent season of preparation is designed to spiral us inward from the grand scheme of Christ’s coming to the laser focus on the actual celebration of the holy feast of Christmas.

“John the Baptist appeared, preaching in the desert of Judea and saying, ‘Repent, for the kingdom of heaven is at hand!’” John the Baptist baptized with water, inviting people to acknowledge and repent of their sins. He didn’t baptize with water and the Holy Spirit, for the forgiveness of those sins. That would have to wait until the coming of Christ. But clearly people were responding to John’s message. And his message was that we need a savior, and that being aware of our need for a savior is essential for preparing ourselves to desire him and receive him.

I always found it interesting that Isaiah’s message, without modern punctuation, could be read,

“A voice cries out, ‘In the wilderness, prepare the way of the Lord’”

and could also be read,

“A voice cries out in the wilderness, ‘Prepare the way of the Lord.’”

We’ll finish then with this beautiful message from Fr. Cantalamessa, the preacher for the papal household.

The heart of the baptist’s preaching is contained in that phrase of Isaiah that he powerfully repeats to his contemporaries: “The voice of one crying out in the desert, make straight his paths!”

Isaiah, to tell the truth, said: “A voice cries out: in the desert prepare the way of the Lord” (Isaiah 40:3). It is not, therefore, a voice in the desert, but a way in the desert. The Evangelists, applying the text to the baptist who preached in the desert of Judaea, modified the punctuation, but without changing the message’s meaning.

Jerusalem was a city surrounded by desert. As soon as a road was traced out, it was soon erased by the sand blown by the wind. When a procession or an important person was coming to Jerusalem it was necessary to go out into the desert to make a more dignified road; brush was cut away, holes were filled, obstacles were flattened, bridges were repaired. This is what was done during Passover, for example, to receive the pilgrims. This is what inspired John the Baptist. Someone who is greater than everyone is about to come, he cries. A road must be made for him in the desert so that he may arrive.

But this path is not made on land but in the heart. To build this road is to engage in conversion. “Straighten the pathways of the Lord!” — this command presupposes a bitter reality: Man is as a city invaded by the desert; he is closed in on himself, cut off by his sin.

Isaiah and John the Baptist speak metaphorically of ravines, mountains, twisted roads and impervious places. We just need to call these things by their real names, which are pride, sloth, lust, gluttony… (the sins and vices that St. Paul talked about last week).

The word of God does not burden us with duties without at the same time giving the assurance that he will do (together with us) what he commands us to do. God, says the prophet Baruch, “has commanded that every lofty mountain be made low, and that the age-old depths and gorges be filled to level ground, that Israel may advance secure in the glory of God” (5:7). God makes low, God fills up, God builds the road.”

My brothers and sisters, our advent task is to cooperate with God’s work in us; to trust ourselves to his work of preparing us to welcome the birth of Christ the King into our hearts. Come, let us adore him.