Today our readings teach us about two things: God healing us, and our thanksgiving to God for healing us.

In our first reading, we have the end of the story of the healing of Naaman. Namaan was a Syrian, the army commander of the king of Aram, and he was highly esteemed and respected. But he had contracted leprosy. Naaman’s wife had an Israelite slave girl who spoke of a prophet in Israel that could cure Naaman. So the king sent Naaman to the king of Israel, along with a letter and gifts for Naaman’s safe passage. One of the interesting things about this story is the Israelite king’s response. It says, “When he read the letter, the king of Israel tore his garments and exclaimed: ‘Am I a god with power over life and death, that this man should send someone for me to cure him of leprosy?” The king tells us that the deadly affliction of leprosy is so horrific that it only a god could cure it.

So, the prophet Elisha hears about this, and sends a message to the king: “Let him come to me and find out that there is a prophet in Israel.” So, when Naaman arrives at Elisha’s dwelling, Elisha sends word to Naaman to bathe seven times in the Jordan River, and he will be healed. And the valiant military leader is a bit insulted. First, Elisha doesn’t even greet him himself, he just sends a messenger out to tell him. And second, the Jordan river is a muddy little creek compared to the great rivers of Syria, and third, just bathe in a muddy river? That’s it? So in anger, he storms away. But his servants plead with him, saying, “if the prophet told you to do something extraordinary, would you not do it? All the more since he told you, ‘Wash, and be clean’?” 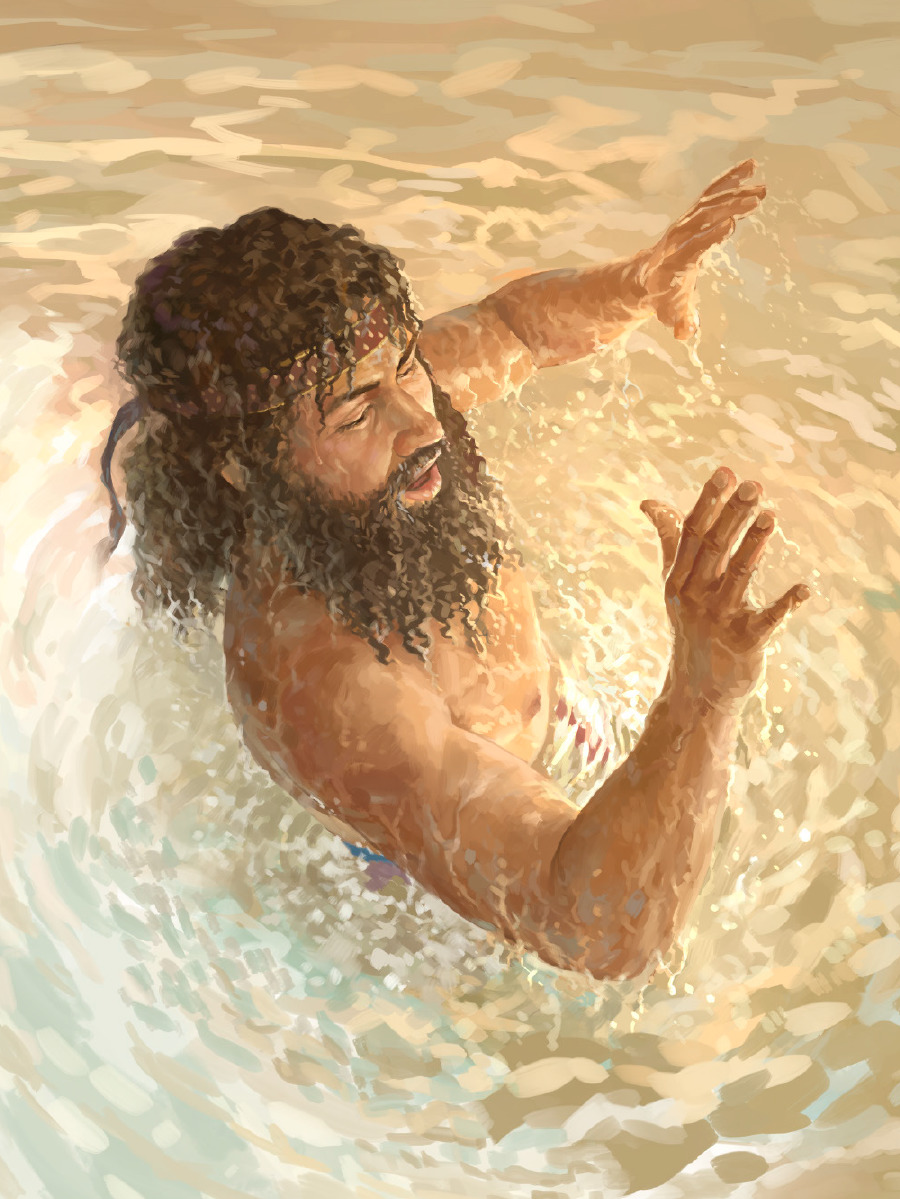 And then this is where our reading picks up. “Naaman went down and plunged into the Jordan seven times at the word of Elisha. His flesh became again like the flesh of a little child, and he was clean of his leprosy.” It wasn’t just that his skin was healed of leprosy and became the normal skin of a grown man. He was made new. His flesh was like that of an infant.

And then we have the second part: Naaman is thankful for God’s healing. He tells Elisha, “Now I know that there is no God in all the earth, except in Israel… please let me, your servant, have two mule-loads of earth, for I will no longer offer holocaust or sacrifice to any other god except to the LORD.” This is a strange request to us, but it shows the belief that gods were territorial, and Naaman wanted to take ground from Israel to worship the God of Israel back in Syria.

So now let’s see how all this relates to the Gospel. Jesus is traveling through Israelite and Samaritan lands and is approached at a distance by ten lepers asking to be healed. “And when he saw them, he said, ‘Go show yourselves to the priests.’ As they were going, they were cleansed.” So leprosy referred to a number of different skin diseases, some of them were temporary, some were not, and included in that was what we know as leprosy, that killed off the nerve endings, leading to infections, until the person died.

In the book of Leviticus, Moses had established procedures for the priests, who were responsible for protecting the physical and spiritual health of the people, and declaring people clean or unclean, part of, or separated from, the community. So if someone had a skin disease, they would be declared unclean, and they had to stay away from others and shout “unclean” to protect the healthy community. But if it seemed that someone had recovered from their disease, they would present themselves to the priests, who would declare them to be clean, and the person would take a ritual bath, wait seven days (the number of the covenant), then there would be a sacrifice with blood and water being sprinkled seven times, and the person would be restored to the community.

So, these ten lepers don’t shout, “Unclean.” They shout, “Jesus, heal us!” And Jesus responds by fulfilling the Law: “Go show yourselves to the priest.” And as we know, they discovered along the way that they were healed. But one of the ten, not one of the Israelites, but the one that was one of those foreigner, no-good, Samaritans, “realizing he had been healed, returned, glorifying God in a loud voice; and he fell at the feet of Jesus and thanked him.” And at the end it says, Jesus said to him, “Stand up and go; your faith (your trust) has saved you.”

Ok. So. Let’s put this all together. The Samaritan and Naaman the Syrian had three things in common. First, obviously they were lepers! Second, they were both healed by their faith and trust in God, after obeying in faith what they were told to do. So that ties us back to last week: faith and trust. And thirdly, they were both foreigners, gentiles. What was our responsorial psalm? “The Lord has revealed to the nations (the gentiles) his saving power.” So part of what is happening here, is not just healing of lepers, but healing of spiritual wounds and division, and the converting of gentiles. Jesus is expanding the covenant, so the New Covenant won’t be just with the children of Abraham, but open to all the children of Adam.

Next thing: Remember what the king of Israel said? “Am I a god with power over life and death, that this man should send someone for me to cure him of leprosy?” Who cured Naaman? God. Who cured the ten lepers? Jesus…who is really God.

Naaman tried to thank Elisha with gifts, but Elisha refused, because it was God who healed Naaman. The Samaritan returned glorifying God, and fell at the feet of Jesus, and thanked him. Did Jesus correct the Samaritan? Did he say, “Stand up, I’m just a man, like you”? No. Because he is God, who has the power to heal, and wants to heal, the world—not just Israel, but all humanity.

As a closing reflection… There was a particular kind of ritual sacrifice in Israel that was described by Moses, but it became popular much later. The Todah sacrifice was not offered in atonement for sin or in reparation, but in thanks and praise to God for a specific act of deliverance.  The Todah was a festive sacrifice offered as part of a seven-step sequence of experiences, in which you (1) began in a situation of distress, (2) you cried out to God, (3) made a vow to offer the Todah sacrifice if God would save you, (4) God saved you, (5) you paid your vow by offering the Todah sacrifice in the temple, (6) you had a festive party as you and your family and friends ate the meat of the sacrifice and all the bread that was involved, and (7) you gave public testimony to all assembled in the Temple concerning how God saved you.

So you would bring the animal to God in thanksgiving, and then the priest would ritually sacrifice it, and then rather than burning it up or keeping it, he gave you back to you for a thanksgiving feast. The Passover is a kind of Todah feast… and so is the celebration of the Eucharist. Eucharist means, “thanksgiving.” From the Psalms, we learn that it was common to offer a wine-libation (offering) as part of the ritual.  This cup of wine, poured out in offering to God, is described: “The cup of salvation I will take up.”

Over this “cup of salvation” Jesus will later speak: “This cup is the new covenant in my blood.” In the Liturgy of the Eucharist, we bring bread and wine to the priest. The priest offers it to God. God accepts the sacrifice, and changes it into the even greater sacrifice of the meat/substance/reality of the Lamb of God, the perfect sacrifice. God then accepts that sacrifice, and then the priest gives it back to us for our thanksgiving feast with our family and friends, as we share with each other our stories of how God has saved us from our distress.

Those who were at any of the Forty Hours Eucharistic Devotions evening liturgies last week prayed Psalm 116, which is a Todah psalm. It says, “How can I repay the Lord for all the good done for me? I will raise the cup of salvation and call on the name of the Lord. I will offer a sacrifice of thanksgiving… I will pay my vows to the Lord in the presence of all his people, In the courts of the house of the Lord...”

In Every Mass, we’re called to grow in this spirit of thanksgiving, because the Eucharist is Jesus’ own prayer of Thanksgiving to the Father. During the Mass, the priest says, “It is truly right and just, our duty and our salvation, always and everywhere to give you thanks, Lord, Holy Father, almighty and eternal God.” It is our duty and our salvation, to thank God always and everywhere. At the Last Supper, Jesus gave thanks as he offered the bread that would be his broken body, and he gave thanks as he offered the wine that would be his spilled blood.

Jesus gave thanks, because Jesus always thanked the Father, because it is right and just. As much as he would suffer in Gethsemane and in his Passion, he was giving thanks, here in the Last Supper, for the victory he knew (through faith and trust) he would have. The Mass is the school in which we participate in Jesus’ own thanksgiving, the sacrifice of praise and thanksgiving the Church makes to the Father; the offering made through Jesus, with Jesus, of Jesus. The Church’s perpetual sacrifice of praise and thanksgiving to the Father through him, with him, and in him, from the rising of the sun to its setting.

1 thought on “Homily: Healing and Thanksgiving”