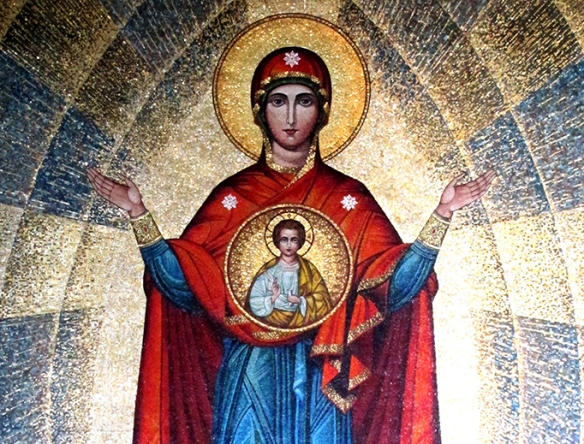 Today we have three themes woven together in our celebration. From our readings, you might notice a repeated reference to the name of Jesus. Second, we celebrate the liturgical feast of Mary as the Mother of God. And third, which you might not know, we celebrate the annual World Day of Peace. So, we’ll touch on each one of these in turn.

Pope Paul VI, in his 1969 apostolic letter, Mysterii Paschalis, reorganized the liturgical calendar, and established January 1 as the solemn feast day of Mary, Mother of God. But before that, this eighth (and last) day of the Christmas Octave, January 1, was the Feast of the Holy Name of Jesus, which is now January 3. However, the readings for the Mass of this day weren’t changed, so they still reflect the original feast, and that’s where we’ll start.

The second of the Ten Commandments is, “You shall not take the name of the LORD your God in vain.” In giving his holy name to Moses, I AM, God identifies that He is the God-Who-Is, and other gods are they-who-are-not. He is Israel’s God, their deliverer from slavery, their protector, their way, their truth, and their life. In the Holy Scriptures, in ancient human culture in general, names are not just arbitrary, but revelations of the nature of the person. Many times in the Scriptures, God provides or changes the name of a person, to reflect that person’s significant role (or changing role) in salvation history. The name participates in the reality of the person. How holy then, is the name God reveals as his own! So just as the first commandment sets apart the people’s reverence for God, the second commandment sets apart reverence for his Holy Name. After Israel’s reconversion to God during the Exile in Babylon, from that time on, they practiced such reverence for God’s name that they not only avoided using it in vain, they avoided using it all (except for Yom Kippur, the Day of Atonement, when it was pronounced by the High Priest). They would substitute “Adonai,” which translated into Greek as “Kyrios,” and into English as “Lord.”

In the Scriptures, as we can see just below, when the word “Lord” appears in all capital letters (as seen below, or small capital letters), the original Hebrew is the holy name revealed to Moses, but which has been substituted out of reverence. The Church continues to observe this practice, inherited from its originally Jewish sensibility. Pope Benedict XVI directed a letter to be sent out in 2008, calling attention to the fact that “in recent years, the practice has crept in of pronouncing the God of Israel’s proper name,” but that this is foreign to Christian tradition, all the way back to the first generations. In the letter, Benedict issued the directive (reminder!) that “in liturgical celebrations, in songs and prayers, the name of God in the form of the tetragrammaton YHWH is neither to be used or pronounced.”

Our first reading, from the book of Numbers, going way back to Moses and the high priest Aaron, describes the ceremony for the priestly blessing of the people, three times invoking God’s name, and that his face to smile upon them.

It’s quite the fitting first reading! That we would enter into the New Year with the ancient priestly blessing by God’s holy name!

When we offer the First Eucharistic Prayer (the only one in constant use leading up to the liturgical reform of the 1970’s), we pray that the Father would look upon our offerings “with a serene and kindly countenance.” This word “countenance” is a fancy word for “face,” and in a way ties to our first reading: that the Lord accept our sacrifice, to look upon it favorably (to smile upon it), so that all of us… “may be filled with every grace and heavenly blessing.”

As we see at the end of our Gospel reading, on the eighth day after the birth of Jesus, the circumcision and naming ritual was held, according to the Law. Here, Mary and Joseph name the child Jesus: “the name given him by the angel before he was conceived in the womb.” Jesus is a Latin form of the Hebrew Jeshua, which means “God saves,” or “salvation,” a name first belonging to Joshua, who succeeded Moses in leading the people of Israel across the threshold of the Jordan River and into the Promised Land. God has united himself to us, made himself intimate with us in our own nature, and approachable by us. And we use the new name that He has given us: Jesus (who saves us; who will lead us through the wilderness, across the threshold, and into the new Promised Land). We can use this name, his holy name, to praise him, to thank him, to call upon his help, or to intercede with him to help others. But still, he is God, and his name is holy—set apart—so we do not use his name in vain, disrespectfully, or carelessly. And we must work to break any bad habit we might already have of treating his holy name in the same manner as any other words.

The second aspect of our celebration today is that of Mary under the title of Mother of God. This title for Mary goes back to the Church Council of Ephesus in 431, what is called one of the early Christological Councils. These early councils were held to settle disagreements about the true nature of Christ, controversies about his humanity, his divinity, his soul, or his nature. In this particular case of Ephesus, there was controversy about the relationship between Christ’s human and divine nature, as it related to Mary. The bishop Nestorius and his friends argued that Jesus simply assumed human nature, and was incubated in Mary, taking nothing of her nature. They used the image of water passing through a hose, the water taking nothing of the hose, or light shining through a piece of glass, the light taking nothing of the nature of glass.

To their credit, they were trying to disassociate Jesus from the Greek myths like Hercules, who were the love-child of Zeus and some human mother. Perhaps this is also why the Church emphasizes that Mary conceived Jesus by the word of the angel, the hovering of the Holy Spirit, and not by more carnal means—as the Greek gods would have done.

But the position winning out as the true Christian belief is that Jesus indeed received his humanity from his mother Mary. He is, in his divinity, God, the Son of God, and in his humanity, the son of Mary, and the two are united in the Divine Messiah, who is Jesus.

The traditional term applied by the Council of Ephesus is that Mary is the theotokos – theo (God) + tokos (bearer), or “one who gives birth to God. This is translated into English as “Mother of God.”

Christ is the head of the Body, and so the Mother of the Head is also the mother of the Body, and we are the mystical body of Christ. So in venerating Mary as the Mother of God, our human and divine Lord Jesus Christ, we are venerating her as our mother also, because we are members of the Body of Christ, as Saint Paul has said. One of the reasons our second reading was chosen is because it is the only glancing mention of Mary in the writings of St. Paul. “When the fullness of time had come, God sent his Son, born of a woman, born under the law, to ransom those under the law, so that we might receive adoption as sons (and daughters). If we are brothers and sisters of Jesus, the Son of God the Father, and He (the Father) is our Father, in Christ, then we are also brothers and sisters of Jesus, the Son of Mary, and she is our mother, in Christ. And our Lord taught us this, when he gave His mother to the Church, in the person of the blessed apostle at the cross, when our Lord said to him, “Behold your mother.”

And our third theme for today’s celebration: Pope Paul VI released a letter on January 1, 1968, with the opening paragraph, “We address Ourself to all men of good will to exhort them to celebrate “The Day of Peace”, throughout the world, on the first day of the year, January 1, 1968. It is Our desire that then, every year, this commemoration be repeated as a hope and as a promise, at the beginning of the calendar which measures and outlines the path of human life in time, that Peace with its just and beneficent equilibrium may dominate the development of events to come.”

The social teaching of the Catholic Church describes peace not simplistically just as an absence of war, but of universal justice, first of humanity toward God, then humanity within the soul, then outward toward others and the natural world. We cannot legislate peace, we cannot achieve peace apart from the source of peace, who is God.

The Hebrew concept of peace is encrypted in their word, “shalom,” which is a greeting, and the word for “peace,” but… at its essence, signifies “wholeness.”

To greet someone (or bid them farewell) with the wish of shalom is to wish them wholeness, completeness, the satisfaction and fulfillment of the holy desires of their heart. Someone said something along the lines of (that’s how quotes work in my brain!) “Human nature is a question… and God is the answer.” Shalom is to have the yearning question within you answered by God. That is peace. The answer to our longing, the satisfaction of our desires, the satiation of our appetites, the pieces within us falling into place, with no additional need but to have ever more of God’s infinite love.

And so, for this new year, we dedicate ourselves to the pursuit of peace, by our words and actions, and by praying that the peace of God soothe the unrest and heal the sin in every human heart.

I have ended my homily on this feast day with this last segment every few years, and it is always well received, and much-requested to have in writing. So, it is my joy to provide it to you again this year…

For this new year, this opportunity for a new beginning, let us begin by consecrating our year and ourselves more intimately with the plan that God has for us, by daily prayer, by frequent confession, by spiritual reading, by frequent acts of corporal works of mercy. And to help, I have for you…

7 Ups for the New Year