So Jesus asks the disciples to put it on the line. And he asked them, “But who do you say that I am?” The people know that Jesus is something special, but they’re not sure what. So he turns to those who he has hand-picked and trained and taught and spent time with, and he wants them to put their faith into words: “Who do you say that I am?” Matthew Kelly calls this, “The Jesus Question,” one of the most important questions we might grapple with, and we all have to answer it: Who do you say that Jesus is? Peter says in response: “You are the Christ.” We’re more familiar with the version in Matthew, in which Peter says, “You are the Messiah, the Son of the living God.” And in Matthew, Jesus affirms Peter’s faith, and says that Peter is the Rock, and on this rock he will build his church. But here in Mark, the call to faith (the call to answer “The Jesus Question,” and respond to it) is more brief and urgent.

In the second part of the gospel reading, Jesus makes his first prediction of the cross. In the Gospel of Matthew, also, Peter’s confession of faith in Jesus as the Messiah is immediately followed by Jesus explaining what that means. It doesn’t mean that he’s going to be the messiah-king who leads the angelic army to vanquish the Romans and liberate Israel. Jesus is here to defeat a much more powerful enemy than the Romans. Jesus is here to defeat Satan, the enemy of human nature and the ultimate plan for humanity, which is communion into the life of God. Satan’s evil plan in Eden had the effect of introducing suffering and death (mortality) into humanity. And in a plan of divine brilliance, God is going to pull off the perfect reversal: becoming human, enduring suffering and death, and defeating Satan using the effects of his own evil plan against him. Satan thinks that the cross and the death of Jesus is his ultimate victory, when it’s truly his perfect and ultimate defeat!

Peter thinks this is not a good plan, and so he pulls Jesus aside and rebukes him. I don’t know if I’d call that courage, but it’s something. And, “at this [Jesus] turned around and, looking at his disciples,” Jesus rebukes him back: “Get behind me, Satan. You are thinking not as God does, but as human beings do.” Peter is acting out of our human nature–to see suffering as something always to be avoided whenever possible. Remember, Satan is the great Tempter. The temptations Jesus endured from Satan in the wilderness were about accomplishing his mission while avoiding the cross, avoiding God’s plan for humanity’s salvation. And now Peter tempts Jesus away from the way of the cross. Peter echoes Satan’s temptation. But Jesus is not following his own plan. He’s following the Father’s plan, and Jesus is perfectly obedient to the Father. The cross is the way, the only way, for Jesus to accomplish the fullness of his mission, his purpose. He must—and will—endure the cross.

And that transitions us into the third part of the gospel reading. Jesus had been talking to the Twelve, and then, “He summoned the crowd with his disciples and said to them, “Whoever wishes to come after me must deny himself, take up his cross, and follow me.” We ALL must endure—not just endure, but embrace—the cross. If we try to avoid the suffering of the cross, the suffering will come to us anyway, but without any salvific value: sterile, fruitless suffering. But… if we embrace the suffering with the cross, then we unite our suffering to the suffering of Christ on the cross, and then it becomes the instrument of uniting us to the source of life and grace. A faith tradition cannot survive long (certainly not thousands of years) without offering a meaningful way to grapple with suffering. If there’s no meaning to suffering, it makes perfect sense to avoid it at all costs–like Peter tried to get Jesus to do. But Jesus understands that his suffering is going to be universally meaningful–and that through it, he is going to make all human suffering meaningful. The door to the healing and joy of paradise has a cross-shaped key-hole. You have to accept the cross of death to receive the promise of resurrection. You have to go through Good Friday to get to Easter Sunday. And that, my friends, is the scandalous, challenging, humble, beautiful heart of the Christian faith. Deny yourself, pick up your cross, and follow Him.

How should we deny ourselves? Well, Peter found out God’s plan, took him aside and said, “No, that’s not a good plan, here’s how it’s going to happen instead.” Do we ever do that? Do we overrule God’s instructions, and law, and plan, and instead choose our own desire, our own law, and our own plan? That’s not denying ourselves, that’s denying Him, and setting ourselves up against Him. Denying ourselves is accepting God’s laws, communicated to us through Sacred Scripture and Sacred Tradition. It is saying “no” to the attachments, addictions, and actions that are sinful, or that we want in a sinful, disordered way. It is putting our plans for our busy day on hold, and taking time to pray. It is accepting the truth we don’t want to. It is doing the things we know are right but don’t want to. It is meeting our responsibilities, our debts, our obligations—as parents, as students, as employees, as spouses, as Catholics. It is the virtuous habits of humility, self-gift, generosity, and piety.

Deny yourself… Pick up your cross… 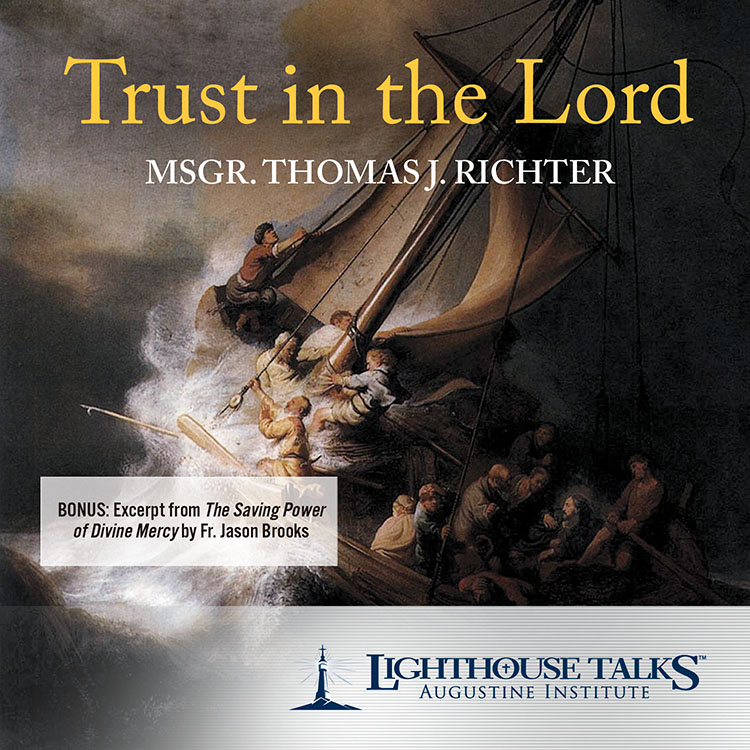 How do we pick up our cross? During Christ’s Passion, Peter denied even knowing Jesus. But in his ministry after Pentecost, then filled with the Holy Spirit, Peter accepted the importance of his role as a Christian leader, and was filled with the selfless love for God and for His people. Then he willingly accepted the cross. Picking up our cross is the many ways in which we accept not getting our way, and not doing what we want. To borrow a phrase from Fr. Thomas Richter, in his brilliant message on Trust in the Lord, picking up the cross is where ever, if we had a magic wand, we would wave it and change something about ourselves or our life. (NOTE: That doesn’t mean an abdication where we can rightfully act to improve the situation; it means an act of the will to accept where God’s will is different than ours.) We can take up our suffering, and invite Jesus into our lives through that union of the same suffering, and we–struggling with our weakness–are filled with the power of his divinity. Our suffering is our portal into union with God, if we pick up our cross and suffer with and for Him, as he did for us. Picking up our cross is also accepting our mission to be a confusing contradiction, a foolishness, to worldly wisdom, and to embrace the life of grace, and the suffering–persecution, mockery, rejection–that comes from living one’s faith in Jesus Christ.

Deny yourself… Pick up your cross… and Follow Him.

How do we follow Him? Look at our first reading, from St. James, who says: “If a brother or sister has nothing to wear and has no food for the day, and one of you says to them, ‘Go in peace, keep warm, and eat well,’ but you do not give them the necessities of the body, what good is it? So also faith, of itself–if it does not have works, [what good is it? It] is dead… Demonstrate your faith to me, without works, and I will demonstrate my faith to you from my works.” The Scriptures repeatedly emphasize that however you are able to do so, in the context of your life, your faith must bear good fruit–in your choices, in your words, in your love toward God and toward others. 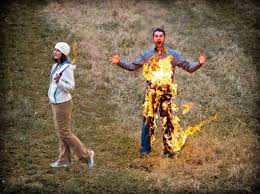 That’s the key: love at work in us. When people are in love, they go to ridiculous lengths to show it! When we give ourselves over to the inspirations of love, we will deny ourselves all kinds of things, and give generously of ourselves in all sorts of ways. We will endure and embrace all sorts of suffering for love. As crazy full of love as we can be as young people, we are called to be infinitely more so for God, and for everyone (that’s the love–the communion of saints–of heaven!) So, completely overfilled with love, we follow Christ. How? By following his example—as priest, prophet and king.

Deny yourself, pick up your cross, and follow Him.