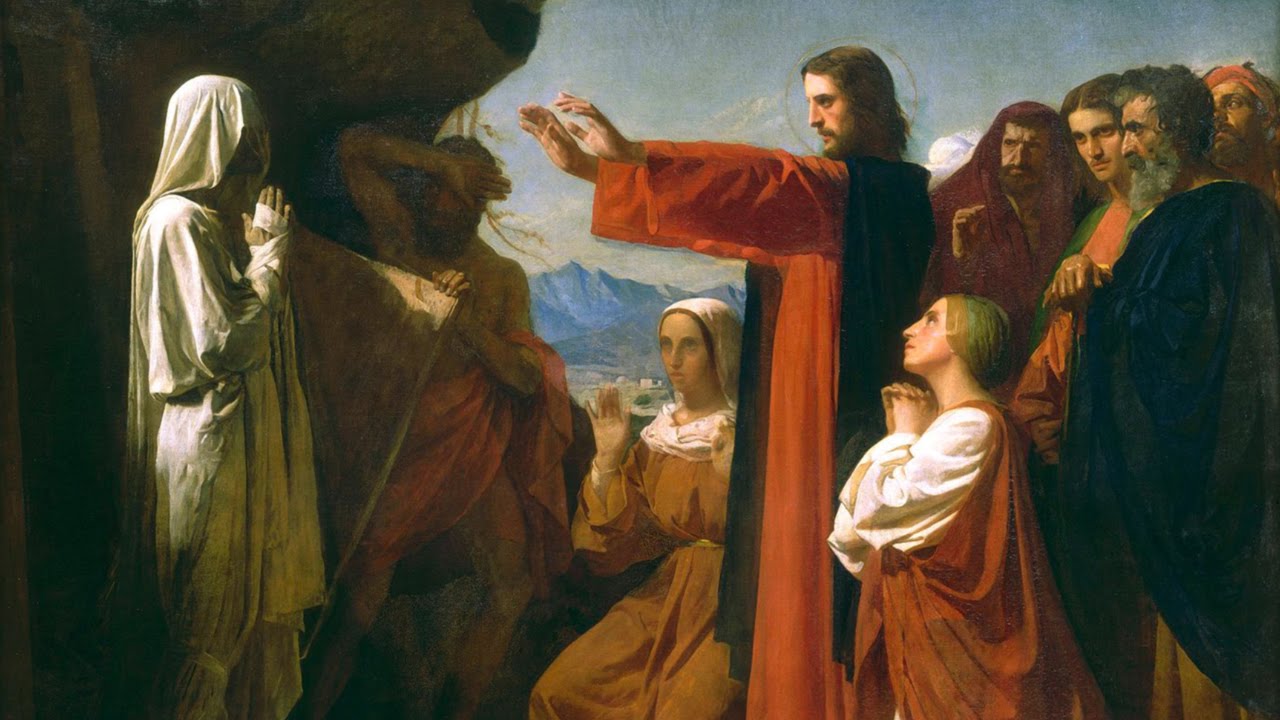 The readings today all revolve around the theme of death and resurrection, quite fitting given that next Sunday we have Palm Sunday of the Passion of our Lord. Additionally, there’s been a trajectory of our readings over this Lenten season.

The first Sunday of Lent we had the temptations in the desert, as Jesus purified his humanity to rely on God alone for his mission. He would accomplish what he came to, by the will and power of the Father, despite all temptations. Likewise, he gave us the model for resisting temptations: to apply the wisdom of the holy scriptures, and disciplining ourselves against the three-fold concupiscence of lust of the eyes, lust of the flesh, and pride.

The second Sunday of Lent we had the Transfiguration, the revelation of Jesus’ divinity and his fulfillment of the Old Testament law and prophets, and assuring his followers that despite appearances, we are to listen to him and trust that everything is happening according to God’s plan, including the betrayal and passion.

The third Sunday of Lent we had the Samaritan woman at the well, and the desire of Jesus to unite himself intimately with his people, both Jews and gentiles, into a new covenant of living water and spirit and life.

Then last week, the fourth Sunday of Lent, we had the healing of the man born blind, the reading that began with the question of whose sin caused the man to be born blind, and Jesus’ answer that it was not any personal sin that caused it, but that through it, God may be glorified, and Jesus may reveal his glory.

Today, the fifth Sunday of Lent, our gospel reading is Jesus raising Lazarus from the dead. The raising of Lazarus leads directly to the pharisees plotting to kill Jesus, then the anointing of Jesus by Lazarus’ sister, Mary, and then the Palm Sunday entry into Jerusalem, which is our reading for next Sunday.

The first reading for today is from of the Old Testament story of the valley of dry bones. Israel is in their Babylonian exile, and God shows the prophet Ezekiel this valley of lifeless bones, and God instructs Ezekiel: “Prophesy over these bones, and say to them: Dry bones, hear the word of the LORD!” so the bones start rattling and coming together, and forming skeletons, then sinews and flesh form on the bones, yet without life. So then God tells Ezekiel, “Say to the breath: ‘Thus says the Lord GOD: From the four winds come, O breath, and breathe into these slain that they may come to life.’ I prophesied as he commanded me, and the breath entered them; they came to life and stood on their feet; [then] He said to me: ‘…these bones are the whole house of Israel! They are saying, “Our bones are dried up, our hope is lost, and we are cut off.” Then our first reading is God’s response: “O my people, I will open your graves and have you rise from them and bring you back to the land of Israel… O my people! I will put my spirit in you that you may live… thus you shall know that I am the LORD.” If that sounds a bit familiar, we use it in the thirteenth station of the cross. Israel is dead in their sin, convicted of their corruption, and sentenced with exile from their land and separation from God’s presence in his holy temple. In this prophecy, God is promising that Israel will be brought to life again, and more gloriously than before, and when it happens, they will respond in joyful faith. While they were joyful when they were freed from Babylon to return to and rebuild Jerusalem, the prophecy is fulfilled in Christ, who gives the people of God the Holy Spirit, the wellspring of living water within them.

In our Gospel reading, Jesus gives the last of his signs before his passion: he performs the divine action of raising the dead to life. Of course, this event isn’t the fullness of the resurrection in Christ. Whatever might be different in the new life Lazarus has received, he again will still die another mortal death. But the point is that only God can raise from the dead. This sign that Jesus is God will bring many to believe in him, and follow him to Jerusalem, to witness his death, and believe in his resurrection, which is foreshadowed by his raising of Lazarus.

There’s something relevant to today’s situation at the beginning of our gospel. Jesus knows Lazarus is about to die, and he chooses to delay his return, as it says, out of love for Lazarus. That’s super interesting. Why does Jesus do that? Well, it’s one thing for Jesus to heal a sick person. But it’s a much greater thing for Jesus to raise a dead person. He’s going to give Lazarus the honor of being the beneficiary of his greatest sign, which is going to lead to a great increase of faith. I know many of us are getting a bit weary of being separated from Jesus in the sacraments and the church. But perhaps this is a parallel—that Jesus is delaying our reunion with him as an instrument of a great increase of faith, and he will bring the dead back to life! So we trust in Jesus, and we wait for him with hearts expanded in faith. 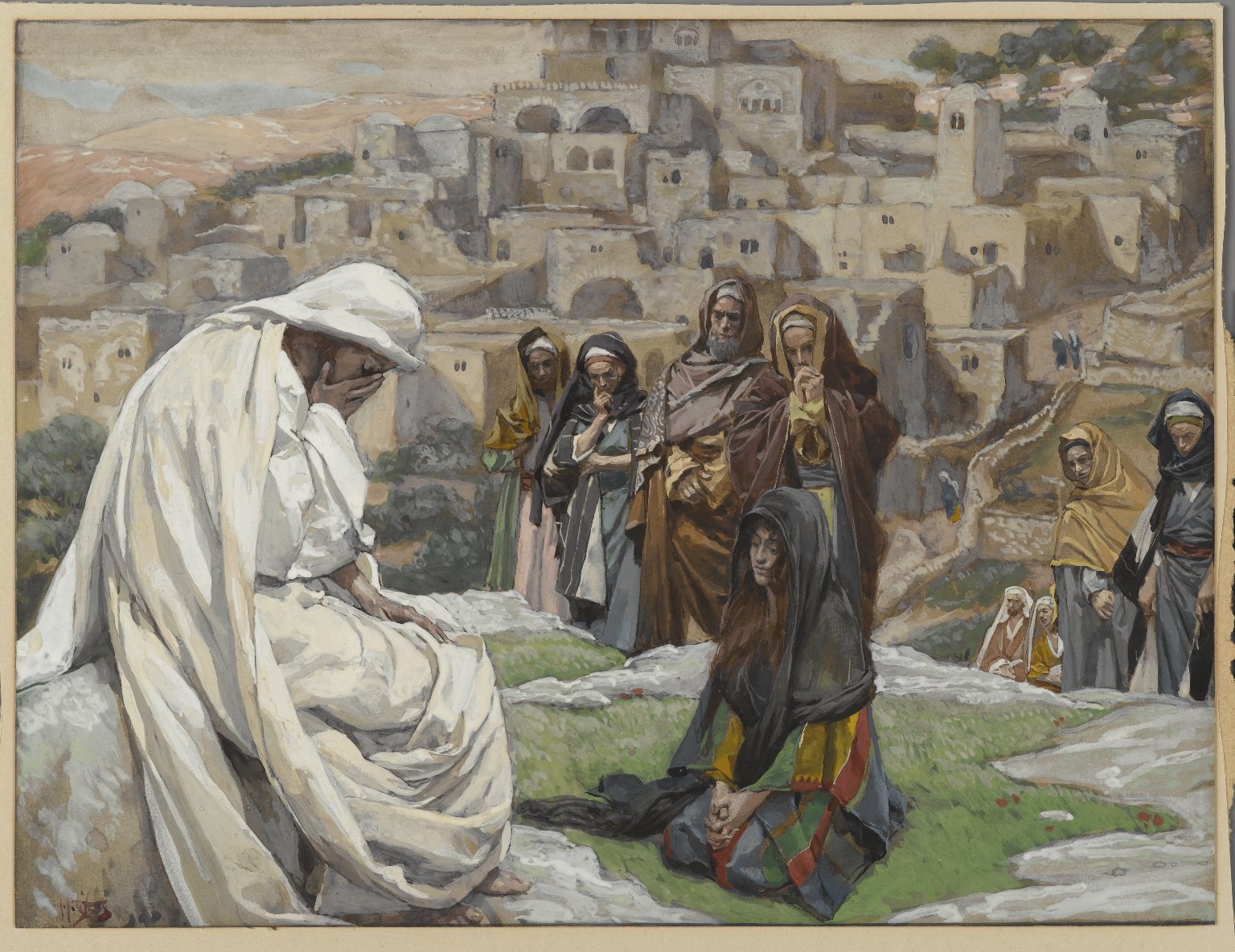 The second thing to point out in this delay, is that he knew Lazarus was very ill and going to die. He knew it would cause great anguish and suffering to Mary and Martha. They both lamented that if Jesus had been there, Lazarus wouldn’t have died. But Jesus chose to allow all that to happen. Jesus didn’t kill Lazarus, nor was Mary and Martha’s suffering assigned to them as punishment for something they did. In fact, Jesus shared in their suffering. In English, it’s the shortest verse in the bible: “Jesus wept.” There’s a lot going on in those two words. He is close to the brokenhearted. He is God who is compassion, love, and mercy. He is God who grieves our separation from him more than we do.

But what if Martha and Mary found out at that moment that Jesus deliberately delayed returning until after Lazarus’ death? I think they might be a bit confused, a bit angry maybe. But at that moment, they didn’t know the plan. We struggle when we’re stuck part-way through the plan, and we don’t know where God is leading. But if we persevere in faith, the road of suffering leads to resurrection. The promised land is worth the wilderness.

Martha, ever the more active of the two sisters, rushed out to meet Jesus, and in their dialogue, she makes a confession of faith rivaling the greatness of Peter and Thomas. “She said to him, ‘Yes, Lord. I have come to believe that you are the Christ, the Son of God, the one who is coming into the world.’” Then we have one of the “I AM” statements of Jesus, where he uses that divine name, I AM, and reveals part of the mystery of his identity, his mission, and his power. “I am the resurrection and the life. Whoever believes in me, even if he dies, will live, and everyone who lives and believes in me will never die.” As Saint John wrote his gospel to his community suffering persecution and martyrdom, no doubt this was a message of great consolation and confidence, allowing them to bravely profess their faith during their suffering.

Ending with this, this assurance of death leading to eternal life is the message of our second reading, from St. Paul’s letter to the Romans. “Brothers and sisters: Those who are in the flesh cannot please God. But you are not in the flesh; on the contrary, you are in the spirit, if only the Spirit of God dwells in you.” There’s that fulfillment of the prophecy from first reading. The Spirit of God dwells in us. We put our old selves to death in the sacrament of baptism, and rise to the life of the Spirit dwelling within us. So we do not live to serve our fallen desires, we are redeemed from our slavery to mammon, and now belong to Jesus, our redeemer. We are not of the flesh, we are of the spirit. “If the Spirit of the one who raised Jesus from the dead dwells in you, the one who raised Christ from the dead will give life to your mortal bodies also, through his Spirit dwelling in you.” And this is the point of all our readings: that Lazarus is our assurance, our sign, we have the promise that if we deny ourselves, pick up our crosses, and follow him, we will share in the resurrection of Christ, and live forever in the pure light of his divine glory.