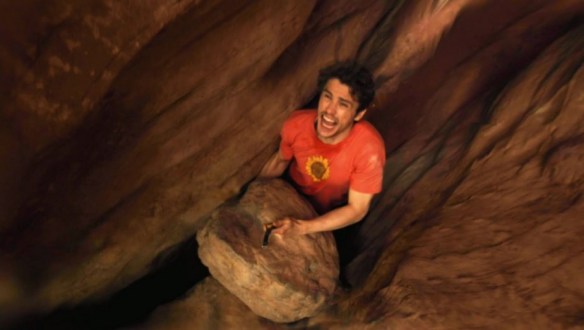 In 2003, in the beautiful mountains of Utah, a twenty-seven-year-old mountain climber named Aron Ralston made a desperate decision. Aron was rock-climbing when his right arm became trapped under an 800-pound boulder. He knew that he was in deep trouble. Unable to move the rock, Aron used his pocketknife and chipped away at the rock for 10 hours, with no success. His family and friends were used to his going off for days, so they weren’t looking for him. After days with no food or water, Aron decided to amputate his arm. And that’s what he did, using only a pocket knife. After he was freed, he applied a tourniquet to his arm and rappelled nearly 70 feet to the floor of the canyon. Then he hiked five miles where he encountered some other hikers and was rescued. Aron Ralston made the excruciating decision to cut off his arm to save his life. It reminds us, perhaps, of Jesus’ words from our Gospel reading for today, “If your hand causes you to sin, cut it off. It is better for you to enter life maimed than with two hands to go into hell.” Aron Ralston made a choice to leave a valuable part of himself behind, in order that he might survive.

Our gospel reading today has four related parts. The story we just heard relates to the fourth part. But our first reading gives us the lens for understanding the first part.

In our first reading, Moses complained to God that he was worn out from carrying the responsibility of leading God’s people through the Exodus, and arbitrating their disputes, and keeping up their spirits. Then we have our reading. The two men who began to prophesy apart from Moses were a scandal to Aaron. Moses responded that it was good that these two men also prophesied, and that this is not an occasion to be alarmed, but to rejoice—not just that these two received the gifts of the Spirit, but to hope and ask for all God’s people to receive and manifest the gifts of the Spirit.

In the Gospel, it’s similar, but a bit different. Someone not associated with Christ or his chosen disciples is casting out demons by the name of Jesus. The disciples are concerned—scandalized. If this stranger is proclaiming Jesus’ name in casting out demons, what else might he be claiming in His name? How do they know this man isn’t undermining Jesus’ truth and authority by false teaching? What right does he think he has to use Jesus’ name?

But like Moses, Jesus calms their fear, and tells them not to see this man as a threat. It’s not just the name of Jesus that casts out demons, but the faith of the one proclaiming the name. And if this man is able to cast out demons by his faith in Jesus’ name, then this man is not an enemy. He is one who has faith in Jesus, but has not yet received the fullness of His truth. But that will be fixed. Because Jesus knows that His death and resurrection are coming, and after that, the pouring out of the Holy Spirit at Pentecost. Jesus says, “When I am lifted up, I will draw all men to myself” (Jn 12:32). The faith that allows this stranger to be casting out demons in Jesus’ name will draw the man by that same faith to the ministry of His Apostles, given their own charism to discern and direct the gifts of the Spirit in service to the Body of Christ, for the glory of God and the salvation of souls. In connecting this story with our first reading, the lectionary is emphasizing this as a foreshadowing of the outpouring of the gifts of the Holy Spirit… and… the importance of knowing that the Spirit will not act as we expect. It requires the discernment by the Church to distinguish between the work of the Holy Spirit, which propels the church and the world forward in God’s plan, and the work of some other spirit, which brings chaos and confusion. Jesus, as the New Moses, wants all the people of God to manifest the gifts of the Holy Spirit; not just Church leaders, but all the faithful who profess and believe in the Holy Name of Jesus.

Imagine the Church—all Christians—so on-fire with the Holy Spirit that even just a passing encounter with the Church—a small kindness like a drink of water—would be enough to plant the seed of conversion in someone. We are afraid to let that power of the Holy Spirit run loose in our lives. But as Pope Saint John Paul often repeated the most repeated phrase throughout the scriptures: “Do not be afraid!”

The third part of our Gospel reading is quite relevant to our modern situation. “Whoever causes one of these little ones who believe in me to sin, it would be better for him if a great millstone were put around his neck and he were thrown into the sea.” Little ones doesn’t just mean children, but spiritual children—innocent disciples, new Christians, the simple faithful who can be easily scandalized, panicked, and can be scattered like startled sheep. The Church provides what is necessary for salvation. And so those, who by the scandal they create, cause the faithful to wander from the Church and jeopardize their salvation, Jesus uses a very strong and memorable image for us to keep in mind. If having a giant millstone tied around your neck and being cast into the sea doesn’t sound like fun, that’s the better alternative to what awaits those who cause scandal to the little ones of the Church.

The fourth part of the gospel: “And if your eye causes you to sin, pluck it out. Better for you to enter into the kingdom of God with one eye than with two eyes to be thrown into Gehenna, where ‘their worm does not die, and the fire is not quenched.’” We don’t like to hear about hell. But no one in the Scriptures mentions hell more often than the Word of God himself, Jesus. So it’s important, of eternal consequence. So we should talk about it.

“Many centuries ago, the Canaanites used to perform their liturgies of human sacrifice, their infanticidal devotions, to the devil (in the personage of Moloch) in the valley of Gehenna, or Gehinnom, just outside Jerusalem. It was a vast abortuary. When the people of God entered the Promised Land, God commanded them to kill the supernatural cancer of the Canaanites. Even after that was done, the Jews dared not to live in that valley, and barely even set foot there. They used it to burn their garbage. So the devil’s promised land became God’s garbage dump. And the fires never went out, day or night. Jesus chose this place, Gehenna, as his image for hell. And he told many of the leaders of his Chosen People that they were headed there, and that they were leading many others there with them.” (Peter Kreeft)

I am the target text.

First, I think it would be helpful to talk about the dominant religion in Western society. It’s called, “Moralistic Therapeutic Deism.” This term comes from a 2005 report called “Soul Searching: The Religious and Spiritual Lives of American Teenagers.” No one would identify themselves as adherents to this, but it is functionally the belief system of a large swath of our culture. The five central beliefs are: (1) a god exists who created and ordered the world and watches over human life on earth; (2) God wants people to be good, nice, and fair to each other, as taught by most world religions; (3) the goal of life is to be happy and feel good about oneself; (4) God does not need to be particularly involved in one’s life except when needed to resolve a problem; and (5) Good people go to heaven when they die.

It’s called moralistic because it places high value on “being good.” But “good” is defined by the opinion of secular culture and by not the revealed truth of Christian Faith. So tolerating things the Church calls sin can be seen as “good,” if it makes people feel good about themselves; while calling those things “sinful” is seen as bigoted or intolerant, which is bad.

It’s called deism because God is little more than cosmic roadside-assistance—you can call Him when you’re stuck, but it would be awkward to get too familiar with him. (Technically, it’s “theism” and not “deism,” as deism is a rationalistic belief in a “watchmaker” god who set everything in motion and does not interfere.)

And it’s called therapeutic because the most important thing is to be a basically good, nice person, and you go to heaven. Everyone goes to heaven, all your uncles and mothers and friends; everyone who isn’t literally Hitler.

So (1) there’s no point in talking about hell, (2) all religions are basically the same, (3) 40 years of promoting self-esteem means everyone sees themselves as basically destined for heaven, and (4) the teenagers at the time of this 2005 report are now in their late twenties and thirties, with children of their own, who don’t see the urgency in baptizing their children, or going to confession, or just going to church; and if they go to church, see themselves as good enough people to take communion, regardless of church teaching, which, if it makes you feel bad, is bad. That’s the dominant religious perspective of Western society, even among many of those who go to Church on Sunday.

Combine that with the relativism, hedonism, and narcissism of modern culture, and you have what older people are complaining about when they compare today with the world they grew up in. It’s not that there wasn’t sin. But it was acknowledged as sin, treated as sin, and feared as the real possibility of losing one’s soul to eternal damnation.

It’s not that God created hell to punish people. People have the free will to reject humility and forgiveness, even to the very end—to refuse to acknowledge their sin as sin. We can create habits of willfully choosing other things over God. And we can lead others—little ones—to do the same.

Nobody talked about hell more than Jesus Christ. Because he knows what hell is, and he wants us to avoid the eternal spiritual and physical pains of hell—the chief of which is eternal separation from God, who is love, light, truth, goodness, and beauty.

Of course, lopping off your foot or your hand or your eye won’t help, if it’s your heart—your soul—that is diseased and disordered. It’s not your eye, but how you look at others, and what you look at. It’s not your hand, but what you do (or fail to do) with it. If Jesus, through the Scriptures, and the Sacred Tradition of the Church, says sin matters, then I for one choose to live like it matters.

1 thought on “Homily: If it causes sin…”